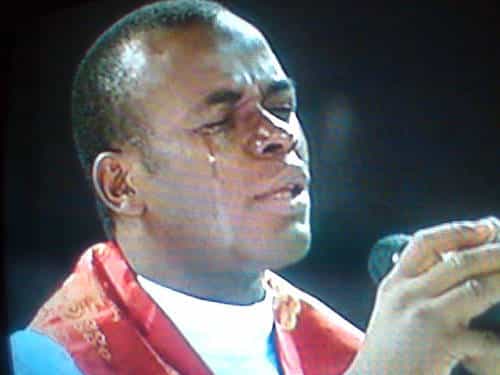 The spiritual director of the Adoration Ministry Enugu Nigeria, Rev. Fr. Ejike Mbaka popularly referred to as Father Mbaka, says Satanic agents are after him in reaction to the prophecy about the sacking of David Lyon as Bayelsa Governor-elect by the Supreme Court of Nigeria.

NewsOne Nigeria reports that the statement of the controversial Catholic priest is coming in response to claims on social media and some sections of the media over the weekend that Father Mbaka had prophesied that Duoye Diri of the Peoples Democratic Party (PDP), would not last beyond two months as the Governor of Bayelsa State.

This burgeoning online news platform understands that the reports had claimed Mbaka said another person from a different political party, not the ruling All Progressives Congress (APC), would mount the saddle once Diri is booted from office.

However, in a statement on Monday through Ike Maximus Ugwuoke, the spokesperson of the Adoration Ministry, Father Mbaka, said the controversial prophecy on the Bayelsa State governorship contest did not originate from him.

The statement reads: “Our attention has been drawn to report in a section of the media that spiritual Director of Adoration Ministry, Fr. Mbaka has prophesied that the newly sworn-in Governor of Bayelsa State, Diri Douye will stay in office as Governor for only two months. The report alleged that he predicted this in ‘Delta state at the ceremony to mark the birthday of his friend and colleague who clocked 68 years’.

“For the sake of justice and fairness, we challenge the originators of this false and mendacious report to mention the name of the so called Fr Mbaka’s friend and colleague whose ceremony he attended in Delta State.

Ugwuoke noted that the fake prophecy attributed to Mbaka was the handiwork of mischief makers bent on dragging the name of the clergy in mud.

“The truth is that Fr Mbaka has not even been in Delta since this year. Fr Mbaka has never at any time, place or circumstance made any prophecy about Bayelsa or who becomes the Governor of the state or his duration in office. The report is obviously the handwork of mischief makers and wicked idiots who are on demonic and satanic assignment to damage Fr Mbaka’s reputation and brand him a false prophet.

“Fr Mbaka has been preoccupied with the charitable and miraculous works God has been using him to do in the ministry. He has been immersed in thanksgiving to God for the fulfilment of his prophecy on Hope Uzodinma becoming the Governor of Imo State and so he never attended any such ceremony in Delta State or anywhere else where he could have made such prediction as alleged by these satanic agents. During Fr Mbaka’s Sunday mass today, he refuted this report himself publicly at the altar.

He warned those impersonating Father Mbaka to desist from such acts or face the wrath of God.

“Those who impersonate Fr Mbaka on the media should be careful, else they are attracting the wrath of God upon themselves.”