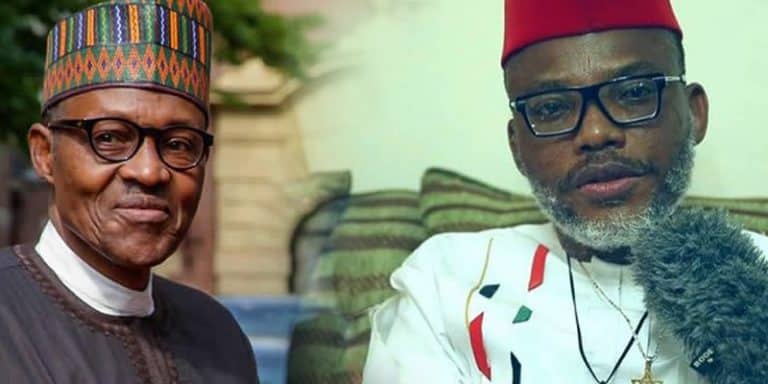 NewsOne Nigeria reports that the IPOB leader made this statement on social media network, Facebook in reaction to the memo from Babagana Monguno’s office stating that Abba Kyari overrides President Buhari’s decisions.

This online news platform understands that Monguno is the National Security Adviser (NSA) to President Buhari while Kyari is the Chief of Staff to the President. Monguno has reportedly clashed with Kyari over the coordination of Nigeria’s security.

The Office of the NSA in a circular accused Kyari of hijacking a role legally assigned to Monguno. The Chief of Staff was also accused of completely sidelining Monguno in the scheme of things when it comes to the strategic decisions in national security operations.

Reacting to the development, the IPOB leader, who just recently buried his parents, said the rift between Kyari and Monguno, has confirmed his claim that Buhari is dead and has since been replaced by an impostor whose real Jubril Al-Sudani from Sudan.

Writing on his Facebook page on Thursday, February 20, Kanu said: “Buhari is dead and buried in a shallow grave in Saudi Arabia with Abba Kyari now in charge in Aso Rock as the ruler of Nigeria, that is the undeniable fact.”

His words: “Those Nigerians who out of a combination of laziness, ignorance, envy, stupidity, cowardice, timidity and curse, challenged my irrefutable assertion that Abba Kyari and not the late Buhari is the unelected president of Nigeria, can now see and hear their own National Security Adviser (NSA) Babagana Monguno confirm what IPOB and every top-level intelligence agency in the world have known for long.

“I know this relevation from Nigeria’s NSA will come as a shock to brainless and roundly hopeless unity begging one Nigerianists but the inescapable truth remains that IPOB is always right. When we say Buhari is dead and buried in a shallow grave in Saudi Arabia with Abba Kyari now in charge in Aso Rock as the ruler of Nigeria, that is the undeniable fact. It was Abba Kyari along with Garba Shehu, Gov. El-Rufai, Mamman Daura, Lawal Daura, Babagana Monguno, Sultan of Sokoto, Issa Funtua and Tukur Buratai that conspired to recruit Jubril Al-Sudani to replace Buhari. Today they have fallen out with each other, hence the infighting.

Fulani Jihadists dangled the presidency in front of Bola Ahmed Tinubu and used it to buy Yoruba media silence on this greatest Fulani fraud of all time. Yoruba media did an excellent job of keeping gullible Nigerians in the dark as Fulani reign of impunity, banditry and terrorism gathered momentum. Today every ethnic group in the damnable British colonial experiment called Nigeria is paying a very price for it. Ignore IPOB at your peril.

“How can ordinary Chief of Staff override the orders of a living president and an erstwhile ruthless and unconscionable dictator for that matter? Where are the brains of some people? The same “no nonsense” military dictator touted by Yoruba media in 2015 is being overridden by a common civilian staff? Nigerians should use their brain for once!