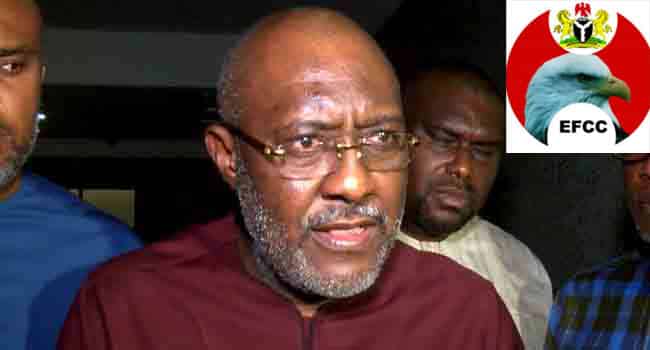 Olisa Metuh, a former National Publicity Secretary of the Peoples Democratic Party (PDP), Nigeria’s main opposition party, has been jailed for 7 years by a Federal High Court sitting in Abuja, the nation’s capital, upon convicting him on charges of money laundering and fraud.

NewsOne Nigeria reports that the presiding judge, Justice Okon Abang, announced the sentencing after delivering judgment for over six hours in the trial of PDP’s Olisa Metuh and his firm, Dextra Investment.

This online news platform understands that before the judgment, Justice Abang had earlier found the former PDP spokesman guilty of all the seven-count charge filed against him by the Economic and Financial Crimes Commission (EFCC).

The anti-graft agency charged Metuh alongside his company, Destra investment, with seven counts of money laundering and diversion of funds he received from the office of the former National Security Adviser (NSA), Sambo Dasuki (rtd).

The trial judge sentenced Metuh after convicting him and found him guilty of all the charges brought against him by the anti-graft agency. This followed a protected trial of the former PDP spokesman which lasted about four years and witnessed a series of drama and adjournment over health-related matters.

Giving his judgement, Justice Abang sentenced the former PDP spokesman to 7 years imprisonment in respect to Counts One to Three. On Count Four, the PDP spokesman was sentenced to five years while he got seven, three and seven years for Counts Five, Six, and Seven years respectively.

The trial judge further ordered that the account of Dextra Investment should be forfeited to the Federal Government and the company be dissolved. He decried that dissipating public funds has eaten so deep into the society, requiring drastic action that would lead to national rebirth.

His words: “The convict had the opportunity of resolving the matter with the complainant without anybody knowing, especially when he was presented with the debit entry of the N50 million transferred to his wife.

“He should have been sober and resolved the matter in order to ensure the matter is not brought to court but instead, he became hardened and joined issues with the EFCC,” Justice Abang said.

According to the trial judge, Metuh also joined his counsels, Emeka Etiaba and Onyechi Ikpeazu, to ridicule the court by writing frivolous petitions.

“It is only God and my family that sustained me in the last four years of hostilities. The convict and a section of the media attempted to humiliate me,” the judge lamented.

Justice Abang insisted that the origin of the $2 million could not be traced, stressing that Nigeria cannot continue like this.

Recounting his ordeal, the trial judge said he could not state all the negative things said about him in the course of the trial.

Justice Abang, however, noted that he has forgiven the former PDP spokesman and his counsel, Etiaba and advised Metuh that he should have been sober and resolve the matter amicably, especially when the case involved a family member.

“If I had the powers to exercise discretion, I would have exercised it in favour of the convict.

“Since I can’t go outside the law which stipulates between seven and 14 years imprisonment, in respect to Counts One to Three, I sentence him to 7 years imprisonment with effect from today (Tuesday),” Justice Abang ruled.