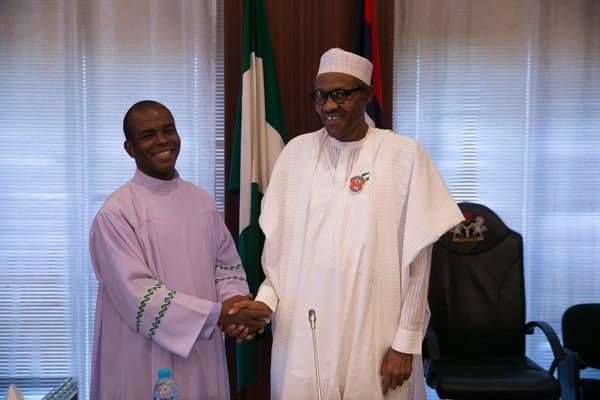 The Spiritual Director of Adoration Ministry in Enugu, southeast Nigeria, Rev. Father Ejike Mbaka, has released a “dangerous prophecy” on those against the growth of Nigeria.

NewsOne Nigeria reports that the Spiritual Director of the AMEN said those who plot to destabilise Nigeria would receive dire punishment from God.

Father Mbaka released the “dangerous prophecy” in his homily, yesterday at the weekly prayer at the Umuchigbo Nike Enugu state adoration ground, where he berated those blaming the present government for the harrowing experience Nigerians were experiencing without going back to history.

The controversial clergyman said the current political, economic and security challenges did not start with the President Muhammadu Buhari administration under the All Progressives Congress (APC), Nigeria’s ruling party.

Father Mbaka berated the administration of the former ruling Peoples Democratic Party (PDP), saying its 16-year reign was wasteful. He said the party contributed immensely to the present adversaries being witnessed by Nigerians.

“When I was shouting it so many years ago, that with the style of governance in the country, time shall come when people will be running helter-skelter, now it is happening, churches protesting everywhere.”

However, Father Mbaka, who predicted the sacking of Emeka Ihedioha and the emergence of Hope Uzodinma as new Imo governor, asked Nigerians to pray fervently for the mercy of God, especially this Lenten season, to reduce the spate of insecurity in the country.

For the Governors, Father Mbaka said that they “should go back to their drawing board, don’t leave the insecurity problem alone to Buhari, he can’t be everywhere. You people receive millions of naira every month for security votes, use that money to do meaningful things in your various states, engage youths and see whether we will not get it right.”