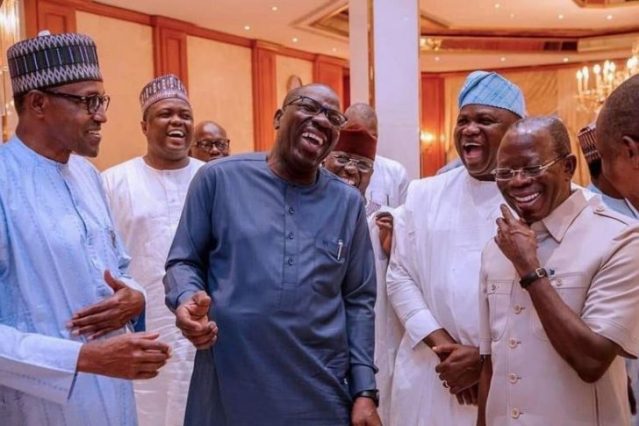 Adams Oshiomhole, the embattled National Chairman of the All Progressives Congress (APC), has identified Governor Godwin Obaseki of Edo State, APC National Vice Chairman (North-East), Mustapha Salihu and an unnamed serving Minister as those spearheading the plot to remove him from office.

NewsOne Nigeria reports that Oshiomhole, who made the submission after a closed-door meeting with President Muhammadu Buhari in Aso Rock Villa, Abuja on Thursday, added that he knows those people behind his troubles and they know him as well, noting however that they can’t pull him down.

This online news platform understands that the embattled APC Chairman said he has done his best for the party but those against him, scheming to take over the party structure are attempting to push him out of office.

NewsOne Nigeria recalls that Oshiomhole was suspended as the APC National Chairman by a court order from Justice Danladi Senchi, of the FCT High Court in Jabi, Abuja on Wednesday. According to the judge, Oshiomhole should remain suspended pending the determination of the substantive suit seeking his perpetual removal as chairman of the party.

However, a Federal High Court in Kano, northern Nigeria on Thursday set aside the ruling of the FCT High Court suspending Oshiomhole. Justice Lewis Allagoa of the Kano High Court ordered the police and Department of State Service (DSS) to provide security for Oshiomhole to resume in his office.

After his meeting with President Buhari on Thursday, Oshiomhole said: “You will recall that I was here two days ago to brief Mr President, as I always do on matters affecting the party. Just yesterday (Wednesday) morning, suddenly, I saw in the news that an FCT high court has suspended me as national chairman. And that the person who went to court includes one of my vice chairmen, North-East, one Mustapha (Salihu, APC national vice chairman, North-East) and four others. I was taken back because in the same suit they joined the APC, the police and the DSS.”

The embattled APC Chairman declared that ward officers of the APC can’t remove him as the National Chairman of the party. He also faulted the Abuja court order which ordered him to vacate office.

“I am not an officer of my ward. I am the national chairman of my party, elected at a national convention by over 7,000 delegates, So, how could nine persons sit down somewhere and purport that they have removed a national chairman? And the court, contrary to all logic, all judicial precedence, finds comfort in granting an interim interlocutory order to stop me from functioning, pending when the matter is determined. In other words, he has given the order without the facts being laid before him and in the process adjourned the case to 7th of April.

He also raised allegations that those behind the plot to remove him from office want to destabilize the APC and want to use the time lag in the court order to fashion out their plans.

“The calculations are clear that between now and April 7, my opponent in the system would have had ample time to do all the mischievous plans they have in place to destabilize the APC because some of them have membership of more than one political party. But, happily, this afternoon, a federal high court that I believe has jurisdictions on federal issues because the DSS, the police are not state institutions but federal institutions, has given an appropriate order to restrain the so-called suspension that was allegedly imposed on me by my ward in Edo State.

“I thought that I had a duty to brief Mr President as the overall leader of our party about this development. Incidentally, when I requested for the audience yesterday, I wasn’t sure what has happened today would happen. But I had a duty to inform him about the court order. But, happily, before coming here, the order from a Federal High Court that has made nonsense of what the FCT court purported to have done has already settled the question.

“And I showed to the President the resolutions of my ward even though a ward executive does not have the powers to remove a national chairman, just to say that the document that we have says clearly that my ward passed a vote of confidence on me. How the court can hold vote of confidence and twist it to mean a vote of no confidence, only that judge can explain it to himself. But the good news is that this is not a final court nor is it the only court. Incidentally, it is just the court that didn’t have the jurisdiction even to listen to this matter. And our lawyers so pointed it out but the judge was determined to oblige those who want to destabilize the All Progressives Congress,” he said.