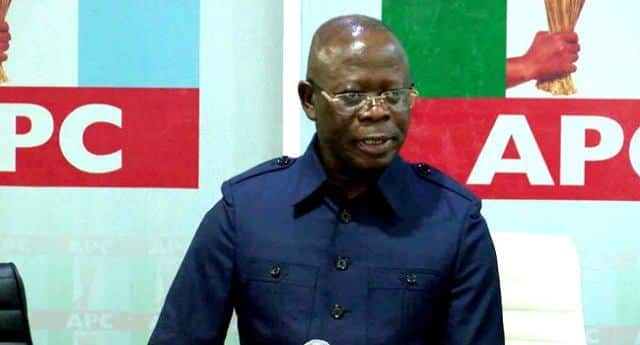 APC National Chairman, Adams Oshiomhole is in fresh trouble a few days after his suspension as the National Chairman of the All Progressives Congress (APC), Nigeria’s ruling political party.

NewsOne Nigeria recalls that Oshiomhole was suspended as the APC National Chairman by a court order from Justice Danladi Senchi, of the FCT High Court in Jabi, Abuja on Wednesday. According to the judge, Oshiomhole should remain suspended pending the determination of the substantive suit seeking his perpetual removal as chairman of the party.

However, a Federal High Court in Kano, northern Nigeria on Thursday set aside the ruling of the FCT High Court suspending Oshiomhole. Justice Lewis Allagoa of the Kano High Court ordered the police and Department of State Service (DSS) to provide security for Oshiomhole to resume in his office.

A day after the decision by the court, the Governors’ Mandate Network has asked governors on the platform of the ruling All Progressives Congress (APC) , to urgently find a worthy replacement for embattled National Chairman of the Party.

The group in a statement said its advice was predicated on the regrettable action the former governor of Edo State had caused the ruling party.

Speaking through Osaro Onaiwu, its chairman, the media network asked the governors to quickly leverage on the breather the High Court provided to salvage their party from impending ruin by nominating a replacement for the ousted Chairman, at least in an acting capacity.

Onaiwu said: ”The truth is that the governors are the real custodians of the party being very close to all the stakeholders at the grassroot, hence they cannot afford to be laid back when things seem not to be working well in their party.

“The Abuja Court has provided them the leeway to restructure and refocus their party away from the brigandage promoted by Oshiomhole.” Onaiwu further argued that with gubernatorial elections coming up shortly in Edo and Ondo state, it may be fatal for the party to allow any vacuum in the leadership of the party stating that Oshiomhole has caused so much havoc already and there is need to rebuild and consolidate for the peace and prosperity of the nation.”