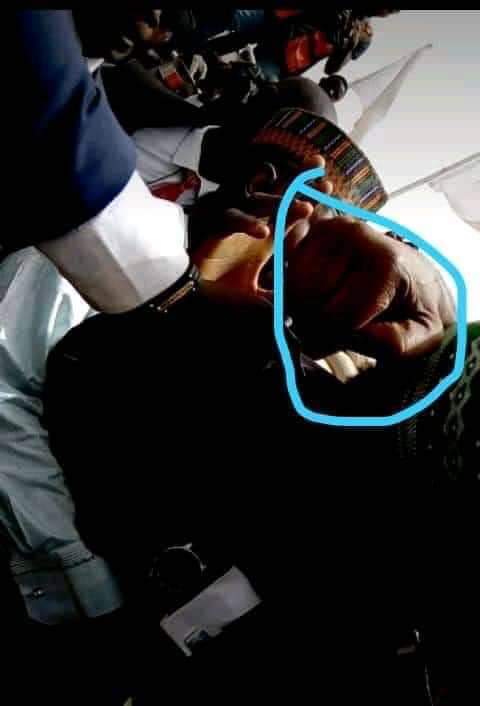 The truth about the purported attack on President Muhammadu Buhari in Argungu, Kebbi State, northern Nigeria, has emerged.

NewsOne Nigeria reports that President Buhari was in Kebbi State for the Argungu Agricultural and Fishing Festival which took place for the first time after about 11 years of suspension.

This burgeoning online news platform understands that while the event was on, a video emerged on the internet suggesting that there was an attempt to attack the President. President Buhari was seen posing for a group photograph with the Kebbi State governor, Abubakar Atiku Bagudu and other dignitaries.

Suddenly, a young man bombed into the session and was believed to have headed straight for the President but was quickly taken care of by the intervention of the security operatives present who moved quickly and apprehended the man.

NewsOne Nigeria reports that these were the interpretations given by several Nigerians who had seen the video of the purported attack on  President Buhari.

However, an eyewitness identified as Aminu Bello took to social media network, Facebook to reveal the truth about the attack on Buhari in Argunguon Thursday, March 12.

Bello wrote: “Point of correction, thank God was there when it happened. The man tried to fish out the then-Gov Adamu Aleiro and now Senator of Kebbi Central. When asked, the man said thief can’t be close to the Mr President before him.

“It was not the grab to the president. So, please I want this media house to drop this fake and malicious news or reportage. I blame investigative journalism.” 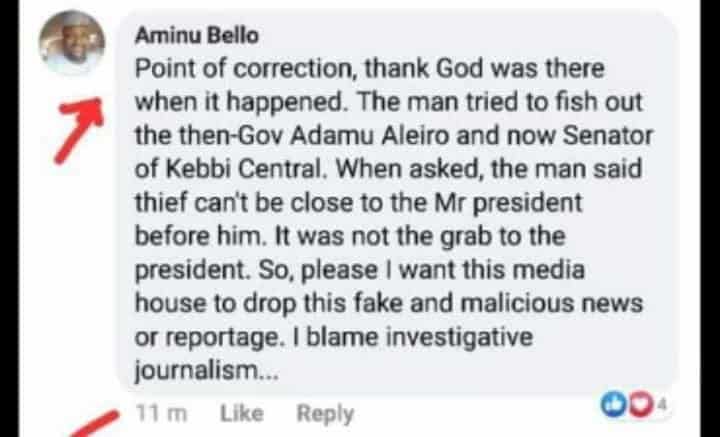 On the other hand, Femi Adesina, President Buhari’s spokesman, said the young man attempted to shake the President and not to attack him as widely speculated.

The Presidential spokesman said in a statement: “President Muhammadu Buhari was in Kebbi State Thursday to declare open the Argungu Fishing and Cultural Festival. It was the first time the international tourism event would hold in eleven years, as security considerations had rendered it impracticable.

“As the President went round the arena to inspect rice pyramids on display, and take photographs with farmers, a young man was so very excited to see his President so close. He made an attempt to get to him.

“World over, such would not be allowed by security details. The young man was prevented, and he protested that he should be allowed to greet his President. Now, professional contortionists are making mischief of the event. They are passing the video clip off on social media as an attempt to attack the President.

“Malicious people always twist things to give a negative narrative. But they simply dash their heads against the wall. The country moves on,” the statement added.

Meanwhile, President Buhari assured that the Federal Government will sustain investments in security infrastructure to boost cultural tourism, and attract more investments in the entertainment industry.

“Our presence here today is evidence of Government’s commitment to restoring security and expanding domestic food production as core mandate of our programmes.

“We are all aware that this important cultural gathering was suspended for 11 years as a result of insecurity. Today, by the grace of God, this festival is back and I hope back for good.

“We are not only celebrating the reinstatement of this important gathering, but we are also celebrating the remarkable progress made in restoring peace and security to this region and indeed, our country. It is also noteworthy that yesterday in Abuja a motor rally across five states, which will terminate here in Argungu, was flagged off,” Buhari said in a statement by Mr. Femi Adesina his special adviser on media and publicity.