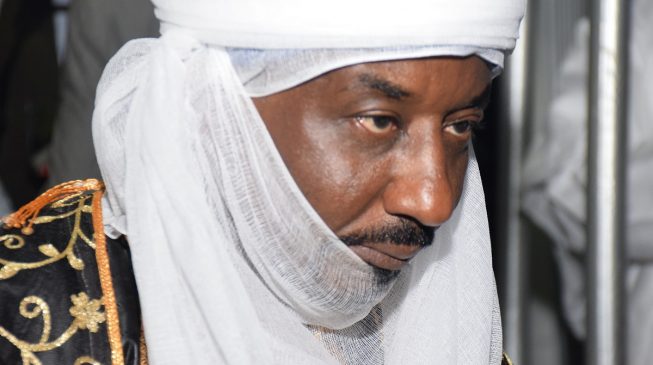 Dethroned Emir Sanusi has revealed those behind his detention in Awe, Nasarawa State.

NewsOne Nigeria reports that Munir Sanusi, Dam Buram Kano who served as chief of staff to Muhammadu Sanusi, deposed emir of Kano, has blamed Abubakar Malami, attorney-general of the federation, for the detention of the former first-class monarch

This burgeoning online news platform recalls that Sanusi, who was removed from office on Monday was confined to Awe in Nasarawa state until a federal high court in Abuja ordered his release, paving the way for him to move to Lagos, on Friday.

In an affidavit filed in support of the suit by the deposed emir, Munir said Sanusi was detained on the orders of Malami and Ibrahim Muktar, attorney-general of Kano, who were respondents in the suit filed by the deposed emir and marked FHC/ABJ/CS/357/2020.

According to PUNCH, Munir said Sanusi had informed Habu Ahmadu, the state’s commissioner of police, of his intention to fly with his family members to Lagos but his request was dismissed.

“I know for a fact that the CP refused the applicant’s requests for protection and to carry his family with him to Lagos and stated that he had no such instructions from above, but instead directed that the applicant be flown to Abuja and then taken to Nasarawa state,” he stated.

“In order not to jeopardise his safety or the safety of any member of his family or indeed other persons around, the applicant cooperated and proceeded in the vehicles provided by officers under the command of the respondents.

“The said commissioner of police, along with other officers under the command of the respondents, harassed and rushed the applicant out of the emir palace, Kano, without letting him take any personal belongings and personal effects, along with him as they took him into their waiting vehicles.

“The applicant was then taken in company with loads of armed men, being officers under the command of the respondents, to the Nigerian air force base in Kano where he was put in a private aircraft to Abuja and departed Kano at about 6.40 pm.

“The applicant was separated from his family who were also carried out of the palace.

“Upon arrival at the Nnamdi Azikiwe International Airport, Abuja, he was conveyed first to Lafia, then to Loko area of Nasarawa State, after being driven for about seven hours in the dead of the night.

Amongst others, dethroned Emir Sanusi is seeking an order directing the respondents to pay him N50 million as damages for the unlawful and unconstitutional arrest and detention, and also to publish in at least three national dailies an unreserved written apology to the applicant for the breach of his fundamental right.

NewsOne Nigeria reports that a former governor of Kano state, Rabiu Kwankwaso, who appointed Sanusi as emir, had accused President Muhammadu Buhari of ordering his removal, an allegation the president denied.