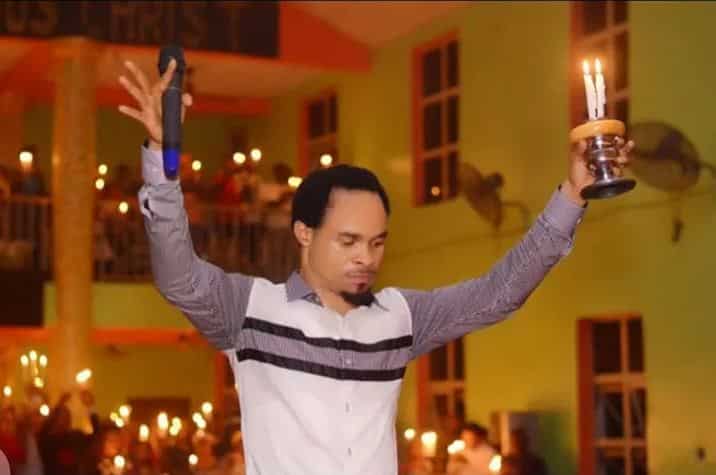 Prophet Odumeje, a controversial Anambra prophet, says DSS did not arrest him for burying charm in church altar.

NewsOne Nigeria understands that reports in the Nigerian media had said that Prophet Chukwuemeka Ohanaemere a.k.a Prophet Odumeje was arrested by the Department of State Services (DSS) for burying charm in the altar of his church, located along 88B BIDA Road in Onitsha, Anambra State.

According to the reports, the police took Prophet Odumeje away to avoid being lynched by angry residents who attempted to storm the church. The report had quoted an eyewitness, Ebuka Oklahoma, to have said that his father woke him up around 2 am on Thursday night, February 6, to watch what the controversial prophet was doing.

The eyewitness said the controversial Anambra prophet buried something in front of the church and later performed a little ritual by walking around the church several times.

Confirming the report, the Police Public Relations Officer of the Edo State Police Command, DSP Osifo Abiodun, said the suspect was under investigation. The spokesman explained that the suspect has made useful statements that will assist the police in their investigation.

However, reacting to the allegation while addressing his church members at the Church Auditorium, Prophet Odumeje denied burying charm in the altar of his church.

Prophet Odumeje, who was apparently furious over the report, placed a curse on Nigerian journalists who reported what he described as a piece of “fake news,” saying that as long as the heaven exists, the generation of the publishers of the report will be wiped out.

His words: “All you that write nonsense, you saw where they caught me, where I buried charm but those things are lies. You that posted that thing as far as this generation is concerned, you and your generation shall pay with their lives.

“I kept quiet, never talked as my father orders me. I hate native doctors, who is that fool that can give me a charm? Why can’t you give it to your brother and sister? Where do you get charm?

“You haven’t saved yourself talkless of somebody giving me charm to come and bury in the altar and the police caught me. Who is that stupid man that can give me charm? Use that charm to save your family first, talkless of giving lion (referring to himself) charm.

“And you that wrote and posted that nonsense as long as the heaven exists, you will never find peace until you and your generation is wiped out,” a furious Prophet Odumeje declared.

The Prophet continued: “You can do everything but don’t lie against a man. On the day this altar was built, everyone was here, I am not the one that built the altar, the altar was built by the church.”

“Who is that person that will give Odumeje power?” The Prophet questioned after which he prayed for his church members.

At the end of the video, Prophet Odumeje said: “There is only one God and there is only one power and that man is Jesus Christ and I am proud to speak about the Almighty Jesus radically.”

A post shared by Prophet Chukwuemeka Ohanaemere (@prophetchukwuemeka) on Mar 12, 2020 at 2:16pm PDT