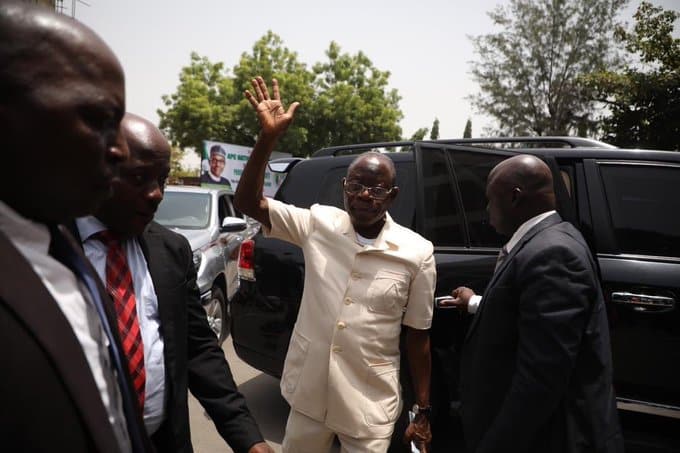 NewsOne Nigeria reports that Oshiomhole, a former governor of Edo State, southern Nigeria, resumed as the National Chairman of the All Progressives Congress (APC) on Tuesday, March 17.

This burgeoning online news platform understands that Oshiomhole made 5 key statements while addressing members of the National Working Committee (NWC) which had in attendance members of both pro-Oshiomhole and anti-Oshiomhole groups.

APC will bounce back

Adams Oshiomhole said despite the various contestations that gripped the party in recent times, the party will bounce back stronger and better. According to him, “despite what we have passed through, this NWC is not divided.”

The chairman, who admitted that the party may have gone through some challenges and disagreement, argued that the action and inaction of NWC members were not to destroy the party but for its progress. He then urged members of the NWC to put all that happened behind them in order for the party to forge ahead.

God allowed APC crisis to teach us a lesson

Adams Oshiomhole said God must have allowed the party to pass through the recent travails in order to teach everyone a lesson and for everyone to readjust their disposition towards their responsibilities.

“I think that God is never wrong, He has allowed what has happened to happen so that we all can learn, everybody re-examines his conscience, strengthen those bonds of friendship, bonds of solidarity and work as a family.”

I’m not the best but I’m sincere

Extending an olive branch to his opponent, Adams Oshiomhole admitted that he may not have been the best chairman, but pointed out that nobody can fault his sincerity of purpose stressing that in the interest of peace he was prepared to reconcile his style of leadership.

“I am the first to admit that I am not the best chairman in the world and I will never be. But no one can fault the sincerity of my purpose. My style can only be my style. But, I recognise that I must reconcile my style to others so that we can meet in the middle of the road.”

Adams Oshiomhole then commended President Muhammadu Buhari, for granting listening hears to those who approached him with a view to ensuring that our party remains on course.

Adams Oshiomhole also expressed appreciation to the role APC Governors played in resolving the party crisis, adding that the attendance at the NWC meeting would shut the mouth of detractors who thought NWC members will be coming to fight.

“I wear no boxing gloves. I wanted to wear complete white to send a message of peace. And, I think everybody came here with a good heart and may God see us through this moment. We are going to bounce back stronger and better.”

Meanwhile, the National Chairman of the APC arrived the party Secretariat at about 12:50 pm to the waiting hands of some loyal party members, APC States Chairmen who came in solidarity with the chairmen. No fewer than 17 States Chairmen were on ground to welcome him.

On arrival, the chairman went straight into his office where he held a brief meeting with some loyal members of the NWC before moving into the Conference room of his office for the meeting.

The acting national Secretary, Chief Victor Giadom who arrived the Secretariat as early as 11:27 am had earlier packed his car at the parking space meant for the national secretary before he took the seat of the national secretary during the meeting as Arc. Waziri Bulama who was nominated for the post was not in attendance.

On the other hand, the National Deputy Chairman, North, Alhaji Lawan Shuaibu was equally absent at the meeting.