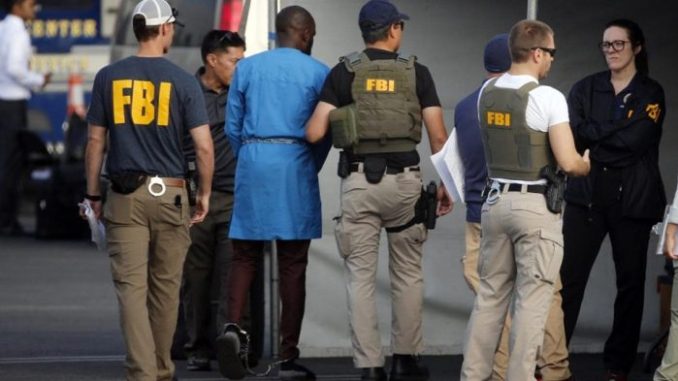 The full list of 13 Nigerian Yahoo boys arrested by the Federal Bureau of Investigation (FBI) over $30m internet fraud has emerged.

NewsOne Nigeria reports that the suspects were arrested by the FBI over an alleged $30 million money-laundering scheme in the United States.

This burgeoning online news platform the US department of justice said federal agents arrested 24 suspects for their involvement in the large-scale fraud which targeted citizens, corporations, and financial institutions throughout the country.

Those arrested and charged to a federal court in Atlanta include:

NewsOne Nigeria reports that two of the Nigerians, Afeez Olaide Adeniran and Blessing Ojo face a separate charge of wire fraud. The indictment alleges that Adeniran defrauded a homebuyer of $40,000 intended for a real estate transaction.

“The indictment alleges that due to a computer intrusion and false invoicing scam, Ojo caused a media company in California to send payments totaling $89,140 to a bank account controlled by one of the defendants. In total, the victim sent $646,840, as a result of the fraud”.

“Fraud schemes, like the ones perpetrated and facilitated by these defendants, inflict considerable losses on citizens, companies, and the financial system,” said U.S. Attorney Byung J. “BJay” Pak.

“Some of these schemes target the elderly and often deplete the victims’ entire life savings. These arrests affirm the Department of Justice’s commitment to prosecuting those who prey on our most vulnerable citizens.”

“The FBI would like to thank our numerous federal, state and local law enforcement partners who helped make these arrests possible,” said Chris Hacker, Special Agent in Charge of FBI Atlanta. “There is no way we can make the victims of these schemes, many who have lost their life savings, whole again. Hopefully, the arrests and pending prosecutions will at least give them solace that someone is being held accountable for their losses.”

According to U.S. Attorney Pak, “the indictment, and other information presented in court: The defendants served as money launderers for other individuals throughout the world who conducted cyber-enabled fraud, including business email compromise schemes, romance scams, and retirement account scams, targeted at companies and individuals across the United States.

“The defendants and co-conspirators facilitated BEC schemes, romance scams, and retirement account scams by receiving and distributing fraudulent funds throughout the United States and the world. Over the course of the conspiracy, the defendants and their co-conspirators laundered over $30 million in fraud proceeds. The defendants created multiple sham companies that did not have physical premises, earn legitimate income, or pay wages to employees.

“Members of the public are reminded that the indictments only contain charges. The defendants are presumed innocent of the charges, and it will be the government’s burden to prove each defendant’s guilt beyond a reasonable doubt at trial.

“The Federal Bureau of Investigation, Department of Labor, Office of Inspector General, U.S. Secret Service, and U.S. Immigration and Customs Enforcement’s Homeland Security Investigations are investigating this case.” he said.