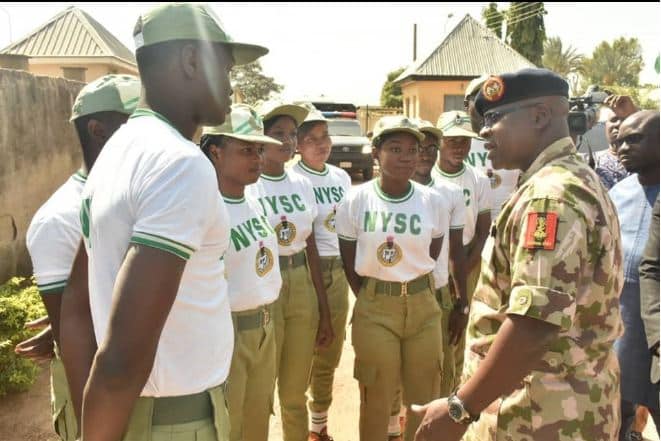 NYSC has shut down all orientation camps over coronavirus in Nigeria.

NewsOneNigeria reports that the National Youth Service Corps (NYSC), on Wednesday, March 18, shut down all its camps and suspended ongoing orientation course for its corps members nationwide.

This burgeoning online news platform understands that the NYSC blamed the decision on the outbreak of coronavirus which on Tuesday forced the Federal Government to cancel the National Sports Festival.

NewsOneNigeria reports that decision of the NYSC to shut down all its orientation camps nationwide was conveyed in a statement from the NYSC management which was posted on its Facebook page Wednesday morning.

The statement reads as thus; “IMPORTANT ANNOUNCEMENT: SUSPENSION OF THE ON-GOING ORIENTATION COURSE

“Sequel to the outbreak of the Coronavirus pandemic which led to the cancellation of the National Sports Festival, Management of the National Youth Service Corps Scheme wishes to announce the suspension of the on-going Orientation Course for the 2020 Batch “A” Stream 1 Corps Members.

“Therefore, the Corps Members shall be posted to commence their primary assignments forthwith, while they shall be invited back to the Orientation Camps when the situation improves, just like it happened a few years ago when the Nation was confronted by the Ebola virus threat.

“Management wishes to state that no Corps Member or Camp Official has contracted the virus,

Meanwhile, the development is coming barely 24 hours after Coronavirus in Nigeria took a new twist with the Lagos State Ministry of Health announcing a third confirmed case of Coronavirus in the West African country.

NewsOne Nigeria reports that the Lagos State Ministry of Health confirmed that there is yet another case of the ravaging coronavirus in Lagos, Nigeria’s commercial city and that the patient is said to be an independent case not connected with the index case.

The 30-year-old Nigerian female carrier, who returned from the United Kingdom on Friday, 13 March 2020, observed self-isolation, developed symptoms and has been tested positive. She is now receiving care in Mainland General Hospital.

The Federal Ministry of Health on Friday morning, February 28, confirmed the first case of the Coronavirus disease (COVID-19) in Lagos, Nigeria’s commercial city.

Nigeria’s minister of health, Dr Osagie Ehanire, confirmed the case in a statement issued in the early hours of Friday, February 28, 2020, saying that the case involves an Italian citizen who works in Nigeria and just returned from Milan, Italy on the 25th of February 2020.

This online news platform understands that the statement said the Italian was confirmed to be positive by the Virology Laboratory of the Lagos University Teaching Hospital, part of the Laboratory Network of the Nigeria Centre for Disease Control (NCDC).

The Ministry of Health in Lagos State confirmed its first case of COVID-19 and reported it to the Federal Ministry of Health. The ministry, however, noted that the patient is clinically stable, with no serious symptoms, and is being managed at the Infectious Disease Hospital in Yaba, Lagos.

The Commissioner for Health in Lagos, Prof Akin Abayomi broke the news in a statement released early on Friday, saying: “The case, which was confirmed on the 27th of February 2020, is the first case to be reported in Nigeria since the outbreak in China in January 2020.

“The case is an Italian citizen who entered Nigeria on the 25th of February from Milan, Italy for a brief business visit. He fell ill on the 26th February and was transferred to Lagos State Biosecurity Facilities for isolation and testing. COVID-19 infection was confirmed by the Virology Laboratory of the Lagos University Teaching Hospital, part of the Laboratory Network of the Nigeria Centre for Disease Control. The patient is clinically stable, with no serious symptoms, and is being managed at the Infectious Disease Hospital in Yaba, Lagos.”