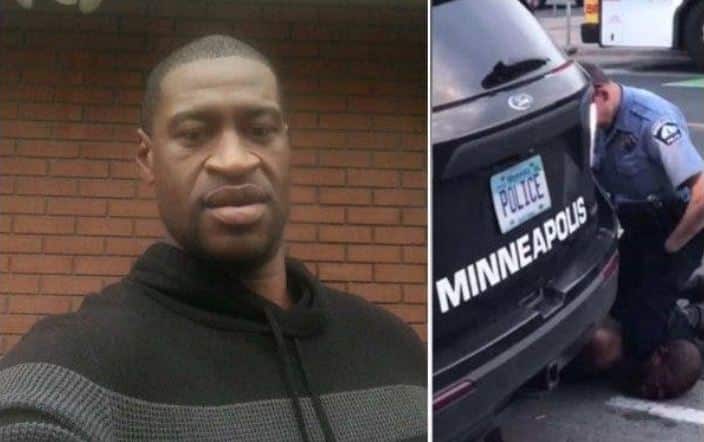 NewsOne Nigeria reports that a video clip that chronicled a man being restrained by the knee of a Minneapolis police officer placed across his throat just moments before his death has gone viral. The victim in the said video is a black man named George Floyd who died from the attack.

In the one minute, fifty-nine seconds video sighted by NewsOne Nigeria, the United States  Black man, George Floyd could be seen pinned down by a police officer with his knee, leading to massive outrage on social media.

Cause Of George Floyd Death

The shocking but rather sad video showed the police officer pinning down George Floyd to the pavement with his knee on the black man’s neck for several minutes, despite the black man yelling that he cannot breathe.

The black man could be heard saying: “I can’t breathe” 13 times before becoming unresponsive and dying. He said “They gonna kill me” 4 times before the police officer killed him. Late George Floyd begged for his Mamma in the sad video.

NewsOne Nigeria reports that the late George Floyd was identified by prominent civil rights lawyer Ben Crump, who said he had been retained by the Floyd family.

What Minneapolis Police officers did to George Floyd

A police statement said officers were responding to a “forgery in progress during the incident. “Officers were advised that the suspect was sitting on top of a blue car and appeared to be under the influence,” the statement said. “Two officers arrived and located the suspect, a male believed to be in his 40s, in his car. He was ordered to step from his car.

“After he got out, he physically resisted officers. Officers were able to get the suspect into handcuffs and noted he appeared to be suffering medical distress. Officers called for an ambulance,” the police statement added.

NewsOne Nigeria understands George Floyd died soon after, the statement said, adding: “At no time were weapons of any type used by anyone involved in this incident. … Body-worn cameras were on and activated during this incident.”

I BELIEVE in nonviolence, but I DOUBT Black (or ANY) people’s ability to put up with police violence INDEFINITELY & NONVIOLENTLY. @ap
pic.twitter.com/PWX2an0G63

George Floyd can be heard saying in the video: “Please, please, I cannot breathe.” The officer tells Floyd to “relax”. Floyd responds: “I can’t breathe. Please, the knee in my neck.” The trigger happen officer continues to hold down Floyd with his knee for several minutes, with Floyd pleading and asking for water.

“My stomach hurts. My neck hurts. Please, please. I can’t breathe,” Floyd cries out while moaning and trying to cough.

Those who were watching the incident unfold can be heard begging police to move off Floyd. It was learned that the four responding officers involved in the incident in south Minneapolis that led to the death of George Floyd have been terminated, according to Minneapolis Mayor Jacob Frey.

“This is the right call,” Frey said in a statement on Twitter.

Frey and Minneapolis Police Chief Medaria Arradondo addressed the community Tuesday afternoon regarding the firing of the officers.

“When Mayor Frey appointed me as chief of the Minneapolis police department, I was very steadfast and strong on what our department vision, values and culture change would be moving forward. One of those pillars is sanctity of life,” Arradondo said. “We know there are inherent dangers in the profession of policing but the vast majority of the work we do never require the use of force.”