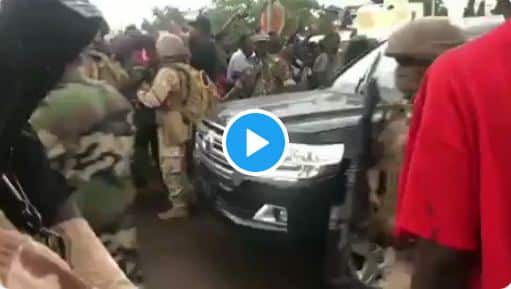 “We can tell you that the president and prime ministers are under our control. We arrested them at his home ” (at the home of the Head of State), said a soldier, who requested anonymity.

“IBK (President Keita) and his Prime Minister are in an armoured vehicle on their way to Kati”, the military camp on the outskirts of Bamako where the mutiny began in the morning, said another military source in the mutineer camp.

Moments after the news of the arrest went viral, a video showing the moment Mali President was arrested by soldiers for corruption in the West African country emerged on social media.

These guys in Bamako, Mali are crazy. They just arrested their President for corruption. ^DoS pic.twitter.com/7aBLnb2y4l


Meanwhile, several government officials and senior army officers in Mali have been detained in the capital of Bamako and at the nearby military base of Kati, unrest was allegedly caused by the financial demands of the soldiers.