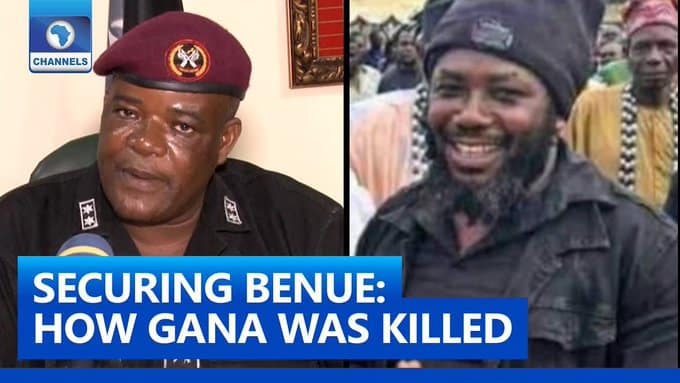 Gana, the wanted Benue gang leader was killed on Tuesday.

NewsOne Nigeria reports that the operation AYEM APKATUMA III of the Nigerian military has explained how it killed Gana, the wanted Benue gang leader, whose real name is Terwase Akwaza in Benue state, northcentral Nigeria.

“At about 1200hrs today, we received strategic information on the movement of the dreaded bandit named Terwase Akwaza Agbadu AKA Gana along Gbese-Gboko-Makurdi road.

“Troops on operation AYEM APKATUMA III moved swiftly and mounted snap roadblocks along routs at 1300hrs, there was a meeting engagement with the convoy of the dreaded bandit AKA Gana.

Major General added that Qty1. Machine, Qty2 waist charms, Qty2.finger ring charms and Qty2 fabricated improvised explosives were also recovered from Gana before his death, adding that 40 of Gana’s men have been captured in the operation and under custody to be handed over to the civil authorities for prosecution.