Home Special Features Trump Vs Biden And The Winner Is… 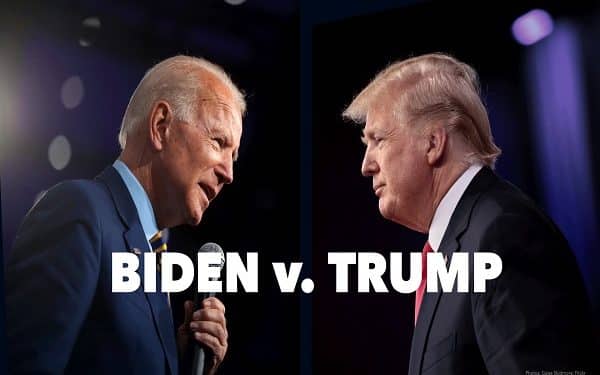 Trump Vs Biden and the winner is…

The 2020 US elections are billed for Tuesday, November 3, 2020. As many as 13 state and territorial governorships, as well as numerous other state and county elections, all 435 seats in the House of Representatives and 35 of the 100 seats in the Senate will be contested. But by far the most keenly followed and most widely reported would be the contest for the presidency between Republican Donald Trump, the incumbent president seeking a second term, and Democrat Joe Biden, a former vice-president. Both are septuagenarians – Trump is 74 years old, while Biden is 78. Both also followed a similar trajectory in clinching the nomination of their respective parties.

The Republican Party establishment never wanted to touch Trump even with a mile-long pole. But he went on to not only win the party primary but also the presidential election. And like his son-in-law, Jared Kushner, recently disclosed in a recently released taped interview, the erstwhile business mogul made short work of accomplishing a “hostile takeover” of the party, such that the fear of Trump has become the beginning of conventional wisdom in the latter-day Grand Old Party (GOP), as the Republican Party is also known!

On his own part, Biden had tried in the past to attain the pinnacle of his illustrious political career but has twice failed to clinch the nomination of the Democratic Party. It was crystal clear that he was spurned by the party establishment as well as by the rank and file during the early phase of the 2020 primary contests. After embarrassingly finishing a distant fifth in February’s New Hampshire’s primary, he was practically given up for dead. But a predominantly Black electorate in South Carolina breathed a new lease of life into his candidacy and he eventually became the biggest beneficiary of the “Super Tuesday” sweepstakes! Even so, many in his party viewed his nomination with forlorn resignation. They felt he would stumble in debates with Trump and that his gaffes would serve as ample ammunition to an opponent known not to give any quarter in a fight to the death!

But that is where the similarity ends. Both men are actually as different as day is from night. Where Trump is erratic and impulsive, Biden is steady and plodding. Where Trump is daring and sensational, Biden presents an empathetic grandfatherly figure – Trump even derisively mocks him with the moniker of “Sleepy Joe.” In fact, Biden can be described as the tortoise to Trump’s hare in that local folklore of a race between both animals.

The contrast between the strategic thrusts of both candidates is really stark. Biden’s message is the exact opposite of Trump’s. Trump has settled for the traditional GOP strategy of divide-and-rule to work up a dominant White bile against minority groups. Except in a handful of cases, such as that of Barack Obama and Bill Clinton, it is a racist card that has worked very well for GOP candidates in various elections from county to state and national levels held in the past 50 years because Whites constitute a clear majority of the total population.

What it requires is just to stoke feelings of anxiety, apprehension and fear among the White folks that a government run by Democrats would use taxes levied on them to fund “socialist” programmes targeted at “indolent” black families, and that crimes would ratchet up dramatically and the values of their suburban homes consequently suffer a decline if Democrats alleged to be very weak on “law and order” hold high elective positions. Republican candidates frequently resorted to acts of voter suppression and intimidation to disenfranchise non-Whites unlikely to vote for them.

On his own part, Biden went out on a limb by betting that most of the country shares his optimism and will reject a president who consistently fanned fears of minorities, disdainfully hurled abuses and invectives at his political opponents, and cast urban centres where minority ethnic nationalities resided as hell-holes. Biden very carefully pitched himself as a “unifier” while trying to de-market Trump as a “divider.”

Nothing fully captures the essence of the times that the 2020 US presidential election is being conducted like that verse from the Book of Ecclesiastes: “To everything there is a season, a time for every purpose under heaven.” Indeed, timing is everything in life. The peculiar circumstances of this year’s contest – a devastating pandemic that killed hundreds of thousands of Americans and an economic collapse throwing millions into the labour market and making those still employed very nervous and vulnerable – call for the very same character traits that would have marked a candidate like Biden as a weak leader under a different scenario: unassuming, grandfatherly, staid, steady hand, calm and reassuring. Talk of the stone the builders rejected suddenly becoming the chief cornerstone!

And, the election just around the corner, Biden appears to hold an unassailable double-digit national lead and narrower but stable leads in many battleground states, including the Rust Belt/Great Lakes states of Michigan, Pennsylvania and Wisconsin that Trump won in 2016. To make matters worse, Biden has even become very competitive in previously solid GOP states like Arizona, Florida, Georgia, Iowa and Ohio where he is leading Trump in the polls!

Trump Vs Biden and the winner is…

But Biden and the Democrats are far from being complacent. They know that Trump is the grandmaster of the “Art of the Deal,” and that the higher the stakes and the more daunting the odds, the greater the likelihood of getting Trump’s adrenalin dangerously up and going! They very well remember that at about this same time four years ago, Hilary Clinton was similarly leading Trump in almost every poll, only for Trump to put political pundits and bookmakers to shame by winning the crucial Electoral College vote. Still, the circumstances between 2016 and 2020 are very different in several important aspects. In addition to the outbreak of the rampaging coronavirus pandemic that was clearly very poorly managed by Trump, Biden is nowhere as controversial a figure as Hilary was. A most recent Fox News survey – Trump’s favourite network – has Biden, very much unlike Hilary, with a 16% net positive favourability rating, compared with a 10% net negative rating for Trump.

And very few would doubt that the highly controversial decision of then-FBI Director James Comey to brew a storm in a teacup with the Hilary Clinton email controversy few days to the election largely cost her the presidency. Trump has tried very hard to orchestrate a similar “October surprise” by goading the Department of Justice to open an investigation casting the Bidens as a family willing to peddle political influence for personal gain – via business dealings Hunter Biden allegedly had with a Ukrainian business entity – but his efforts have failed to produce the traction he desperately yearns for.

Early voting has already surpassed nearly three-quarters of the about 130 million aggregate votes cast in 2016! My predictions? Best case scenario: Biden would blow out Trump in a manner that has not been seen since 1984 when Ronald Reagan took Democratic challenger Walter Mondale to the cleaners. Worst case scenario: Trump would prove yet again to be the political cat with nine lives – but Biden would win the Electoral College vote by the slimmest of margins.

And now this: The Democrats would gain a majority in both the Senate and the House of Representatives, and – Oh yes – they would ultimately pack the Supreme Court to create a level playing jurisprudential field just to undo what Trump and the Republican-dominated upper chamber have done to disingenuously lock in a 6-3 conservative majority. There is a saying in the Niger Delta to the effect that Cunny man die, cunny man bury am!