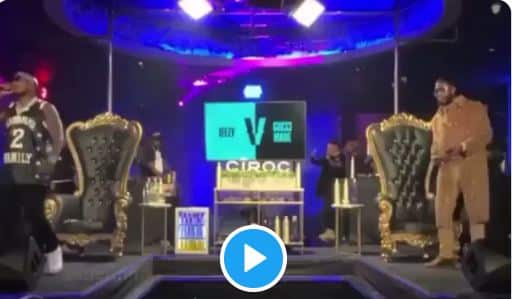 Gucci Vs Jeezy Verzuz battle can be seen below.

NewsOne Nigeria reports that Jeezy and Gucci Mane’s Verzuz face-off took place tonight at Atlanta’s Magic City, and for most of the broadcast, it was not as cordial of an event as previous Verzuz battles.

Following a delay apparently due to COVID-19 testing, Stacey Abrams made an appearance to encourage people to vote in the Senate runoff election in Georgia. “Can you wipe my record clean,” Gucci asked. Shortly after, Gucci opened by performing the Jeezy diss track “Round 1.” Find a track-by-track breakdown of how the night played out below.

Before “Gangsta Music,” Jeezy refused to stand up from his chair while Gucci remained on his feet. “That was cute,” each of them said at different points in response to their counterpart’s performance. Gucci kept picking newer songs during rounds where Jeezy played tracks from 2005 (or, as Gucci called it, “that old ass shit”).

After Gucci performed the Jeezy diss “Truth,” Jeezy took a moment to explain why he invited Gucci to take T.I.’s place. “I tell you what though—when I called you and extended this invite my n—a, I did it as a real man,” Jeezy said. “It’s been 20 motherfuckin’ years.” Gucci corrected him that their feud had been going for 15 years. “OK, well however many, you’re still talkin’ the same shit.”

The two interrupted each other repeatedly. “I told you straight off the dribble, n—a, we can’t do nothin’ if it ain’t street,” Gucci said. “If I can’t perform the truth we ain’t doin’ it.” Jeezy assured him it was “all good” and continued:

In the final round, the two rappers announced plans to end their feud right there with a joint performance of “Icy,” Gucci’s Jeezy-featuring 2005 song. Gucci thanked Jeezy for extending the olive branch, and then announced they were going to a club together.

The last Verzuz match featured Patti LaBelle and Gladys Knight. Previous battles have been between Brandy and Monica, Jill Scott and Erykah Badu, 2 Chainz and Rick Ross, and DMX and Snoop Dogg.