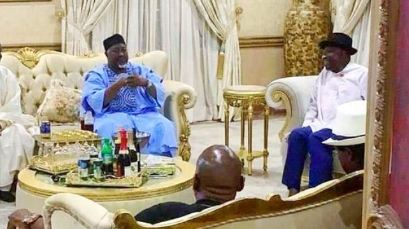 NewsOne Nigeria reports that some governors on the platform of the All Progressives Congress (APC), Nigeria’s ruling party and chieftains of the party, have visited former President, Goodluck Jonathan, as pressure continues to mount on him to contest the 2023 election.

APC Caretaker Chairman and APC Governors visited Former President Jonathan at his Abuja residence to felicitate with him on his 63rd birthday anniversary.

Also a former President of the Nigerian Senate, who is a chieftain of the APC, Ken Nnamani, was on the visit.

During the meeting, the APC governors, it was gathered, used the opportunity of the visit to ask the former President to run for president in 2023 on the platform of the party. It was also gathered that the proposal will satisfy the increasing clamor for a power shift to the South.

Reports have it that the move to allow Jonathan to run for President in 2023 was decided by some loyalists to President Muhammadu Buhari.

Also, the group believes that the former Nigerian leader would be harmless to their interest and as such the right person to take over from the President.

It was also gathered that the reason the group wants former President Jonathan to succeed Buhari is that he handed over power peacefully and nursed no bitterness against anyone. Also, the group believes that the former Nigerian President will not be a threat to the interest of the north.

Former President Jonathan, who served one term after completing the tenure of late President, Musa Yar’Adua was defeated by President Muhammadu Buhari in 2015.

However, NewsOne Nigeria understands that there have been calls lately for Former President Jonathan to run for his final tenure as Nigeria’s president after Buhari come  2023 Presidency.