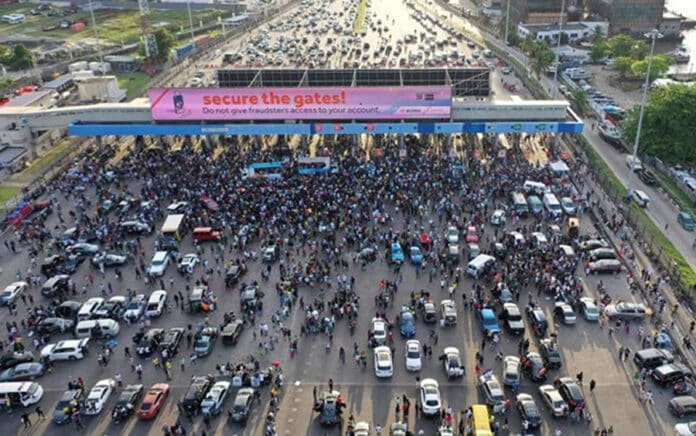 UK Parliament has set a date to deliberate sanction against FG over #EndSARS.

NewsOne Nigeria reports that the British Parliament also known as the UK Parliament has disclosed that it will consider a petition by some groups and individuals, asking that it should apply sanctions against the Nigerian Government and officials for alleged human rights violations during the #EndSARS protest and Lekki shooting incident.

The UK parliament also claimed that the shooting of unarmed protesters at the Lekki Tollgate gave rise to the outbreak of violence and is waiting for the outcome of investigations by the federal and state governments into reports of police brutality and extra-judicial killings.

This disclosure was made by the UK parliament, in a response to a petition signed by over 220,118 individuals in the United Kingdom, requesting the UK Government to sanction the Federal Government of Nigeria for alleged violations of human rights in respect to the #EndSARS protests across the country.

The response was signed by the Foreign, Commonwealth & Development Office and obtained from the official website of the parliament –https://petition.parliament.uk/petitions/554150.

The reply from the uk parliament partly reads, “The UK Government is deeply concerned by violence during recent protests in Nigeria, which tragically claimed lives. Our thoughts are with the families of all those affected.”

“Parliament will debate this petition on November 23, 2020. You will be able to watch online on the UK Parliament YouTube channel. On July 6, the British Government established the Global Human Rights sanctions regime by laying regulations in Parliament under the Sanctions and Anti-Money Laundering Act 2018.

“The Foreign Secretary set out in full the scope of the UK’s new Global Human Rights sanctions regime. He announced the first tranche of designations, as well as the Government’s approach to future designations.

“This sanctions regime will give the UK a powerful new tool to hold to account those involved in serious human rights violations or abuses. The sanctions regime is not intended to target individual countries.

“It will allow for sanctions to be imposed on individuals and entities involved in serious human rights violations or abuses around the world.

“We will continue to consider potential designations under the Global Human Rights sanctions regime. It is a longstanding practice not to speculate on future sanctions designations as to do so could reduce the impact of the designations. The UK Government will keep all evidence and potential listings under close review,” the UK parliament said in its reply.

Meanwhile, the response pointed out the different interventions that the British government had made as part of the efforts to draw the attention of the Federal Government to cases of human rights violation during the #EndSARS protest.

The UK parliament asked the British government to look at the possibility of imposing new sanctions that allow individuals and entities that violate human rights around the world to be targeted.

To impose sanctions on members of the Nigerian government and police force involved in any human rights abuses during the protests.

It said the Foreign Secretary issued a statement on October 21 calling for an end to the violence and for the Nigerian Government to urgently investigate reports of brutality by its security forces and hold those responsible to account.

NewsOne Nigeria recalls that there were petitions against the Nigerian government and public officials by Nigerians at the UK parliament over human rights abuses during the #EndSARS protests. They called for the implementation of sanctions that would allow individuals and entities that violate human rights to be targeted.