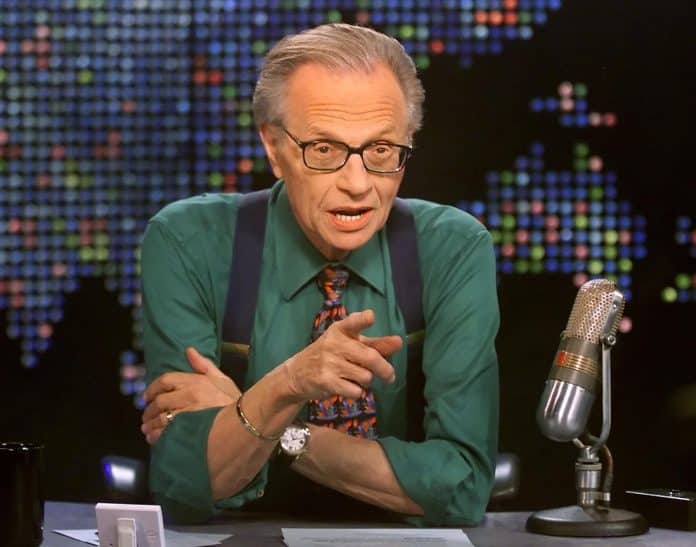 NewsOne Nigeria reports that the Larry King, the award-winning TV and radio host who became a household name with his long-running CNN show Larry King Live, died Saturday morning at the age of 87.

“With profound sadness, Ora Media announces the death of our co-founder, host, and friend Larry King, who passed away this morning at age 87 at Cedars-Sinai Medical Center in Los Angeles,” King’s official Twitter announced Saturday morning. No cause of death was provided, but King’s death came weeks after it was revealed that the 87-year-old host was battling coronavirus.

“For 63 years and across the platforms of radio, television and digital media, Larry’s many thousands of interviews, awards, and global acclaim stand as a testament to his unique and lasting talent as a broadcaster. Additionally, while it was his name appearing in the shows’ titles, Larry always viewed his interview subjects as the true stars of his programs, and himself as merely an unbiased conduit between the guest and audience. Whether he was interviewing a U.S. president, foreign leader, celebrity, scandal-ridden personage, or an everyman, Larry liked to ask short, direct, and uncomplicated questions. He believed concise questions usually provided the best answers, and he was not wrong in that belief.”

King has battled other health problems over the years, including prostate cancer and type-two diabetes. In 1987, he suffered a heart attack that required quintuple-bypass surgery, and in 2017 he underwent surgery to remove a malignant tumor in his lung.

Earlier this year, two of King’s adult children – son Andy and daughter Chaia – died within weeks of each other. Despite the tragedies, King continued to release new episodes of his YouTube series Larry King Now, with the most recent episode premiering two weeks ago. In May, King also announced plans to enter the world of podcasting.

The Brooklyn-born King began his career in the late 1950s as a newspaper journalist and Miami DJ before expanding his radio repertoire to celebrity interviews and sporting event commentary. In 1978, King launched his nationwide Larry King Show broadcast, which he continued to host even after his Larry King Live television show began airing on CNN in 1985.

“An interview is an interview. It’s basically who, what, where, when and why. And while it is certainly kind of an exalted place to sit with the Prime Minister of Great Britain or the president of a country, it’s still… ‘why do you do what you do? How do you feel about what you do? What do you think about what’s happening in the world?’ It comes down to an interviewer is an interviewer,” King said in a Television Academy interview.

“I never sat down with a President of the United States or a world leader or head of a country and thought, ‘whew, this is the head of a country — I have to be different!’ I’m still every man. What would a guy in the street say to Chirac of France if you had a chance to talk to him?”

Donald Trump was another frequent guest of King’s decades before his presidency, with the real estate mogul even hosting a 25th anniversary special dedicated to the host; in a resurfaced clip from a 1987 interview, Trump admitted to King he had no desire to run for president and criticized the foreign policy of then-President Ronald Reagan:

King won two Peabody Awards for his broadcasting work and was inducted into the both National Radio Hall of Fame and the Broadcasters Hall of Fame. Following his exit from Larry King Live, the host moved on to Larry King Now and Politicking With Larry King, which launched in 2012 and 2013 respectively. He also made countless on-screen appearances in TV shows and movies – mostly playing himself – including roles on 30 Rock, Murphy Brown, Ghostbusters, Frasier, Primary Colors and American Crime Story.

King, who was married eight times, also had a long history of health issues, including his first heart attack in 1987. In April 2019, TMZ reported that King suffered a heart attack prior while preparing to visit the hospital for a previously scheduled angiogram. After arriving via ambulance, doctors reportedly performed an angioplasty to repair a collapsed artery.

However, Ora TV — the digital TV network King founded in 2012, home to his shows Larry King Now and Politicking with Larry King — refuted the details of that report in a statement, noting, “His doctors say he did not have a heart attack and he did not go into cardiac arrest.”

“On the morning of Thursday, April 23rd, Larry King was scheduled for an angioplasty,” the statement read. “Before his scheduled procedure, he experienced angina and went to the hospital early to be examined. His doctor successfully performed the angioplasty and inserted stents to reopen the previous bypass from 1987. He has been recuperating in the hospital and is scheduled to be released soon. His doctors expect him to make a full recovery.”  The statement added at the time that King was “in good spirits” at the time and preparing to resume work “soon” on both Larry King Now and Politicking.