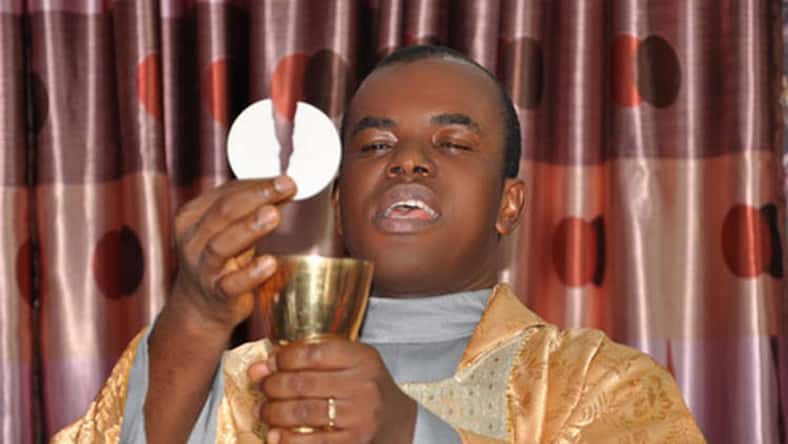 NewsOne Nigeria reports that the Catholic Diocese of Enugu, southeast Nigeria, has suspended the Spiritual Director of the Adoration Ministry (AMEN), Rev. Fr. Ejike Mbaka, from church activities for one month.

This online news platform understands that Father Mbaka’s suspension is coming at a time the controversial priest’s political escapades continue to overshadow his theological obligations on a scale that nurtures unending concerns amongst his senior clerics.

It was learned that Father Mbaka was asked to proceed on suspension with effect from May 3 after being summoned by Callistus Valentine Onaga, the diocesan bishop.

Bishop Onaga, it was learned, called Mbaka in following his repeated clashes with President Muhammadu Buhari and warned that his conduct was smearing the church’s image, the largest of any Christian organisation worldwide, church officials familiar with the matter told Peoples Gazette.

This is coming after NewsOne Nigeria had reported last Wednesday Mbaka’s criticism of the Muhammadu Buhari regime over its inaction on the widespread killings across the nation.

Speaking at the Adoration Ministry in Enugu, Mbaka said it is wrong for Buhari to maintain grave silence despite the incessant killings in the country.

He accused the government of being behind several killings across the country and tagging separatists groups as terrorists rather than focus on getting them good jobs.

The cleric also frowned on the activities of herders that destroy the farmland of people without any repercussion.

He said Buhari had failed Nigeria woefully and that he should resign now. Mbaka also called for the President’s impeachment.

Following his suspension, Mbaka returned to his ministry that lies north of the outskirts of Enugu city centre, where he subsequently incited his members against the bishop, sources said.

Fr Mbaka’s followers claimed without evidence that he was kidnapped by Mr Onaga and handed over to the State Security Service. They subsequently marched on the premises of the bishop on Wednesday morning, looting and destroying assets therein.

The mob also descended on the Holy Ghost Cathedral, again looting and destroying items in the building. The members also went to town to allege that the SSS had arrested Mr Mbaka — generating widespread media reports despite lacking requisite corroboration.

A spokesman for the SSS denied taking Fr Mbaka into custody or coming in any contacts with him when reached by The Gazette, contrary to his followers’ rumours.

Meanwhile, spokesman for the diocese did not immediately return a request seeking comments. Mbaka’s line was switched off when dialled by The Gazette on Wednesday night.

Before falling out with Buhari recently, Mr Mbaka was an ardent supporter of the President. He endorsed his campaign in 2015 and claimed his blessings played a role in its success.

However, as Buhari’s regime failed to tackle acute poverty and insecurity, Mr Mbaka said he was compelled to speak up and distance himself from his regime, describing it as evil and satanic and calling on the President himself to vacate office.

Church sources said Fr Mbaka’s latest suspension was being viewed as significant for its undertone, but not the first time the fiery priest would face administrative action.

“We know people will link this to his confrontation with Buhari, but he was once demoted from a parish priest to a deputy under a parish priest,” a church official told TheGazette. “He had also been transferred from bigger parishes to smaller ones for his frequent infractions in the past.”

Still, church officials admitted Fr Mbaka’s Adoration Ministry has been a cash cow for the Enugu Diocese, even though it was built by Mr Mbaka and not directly under its control.

“The real problem is the Diocese has been financially dependent on Mbaka, collecting his millions,” a source said, adding that some of the senior clerics themselves have also been in bed with politicians whom Father Mbaka has long railed against.