Home News Trouble Looms As Rocket Launched By China Is Set To Land In... 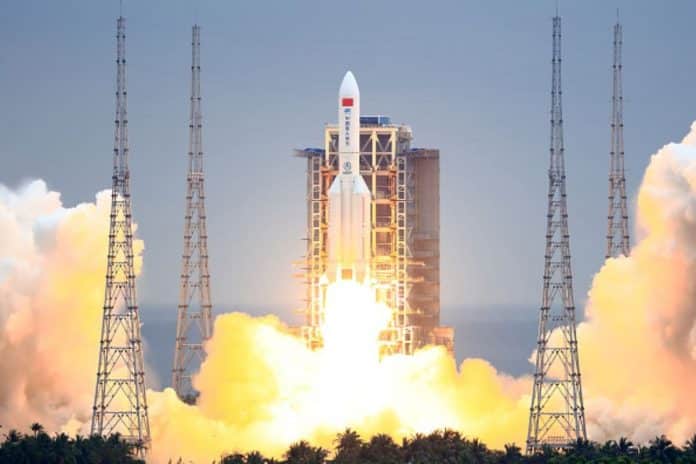 Rocket launched by China is set to land in Abuja.

Newsone reports that a rocket launched by China is set to crash back to earth this weekend with experts saying they are not sure where or when the rocket launched in April 2021 will land.

This online news platform understands that the Federal Capital Territory, Abuja, has been listed as one of the cities where the rocket by berth.

A report monitored on NBC news by Newsone indicates that a piece of a rocket launched by China in April 2021 is expected to re-enter the earth’s atmosphere late Saturday, May 8, or early Sunday, May 9 according to experts and officials.

Newsone understands that the report said the 98-foot-long 5B rocket is tumbling through space in an uncontrolled orbit at 18,000 miles per hour after blasting off last month carrying part of the country’s new space station.

And while it’s common for pieces of rockets to fall back to earth, this particular section has drawn concern because its lack of control means experts aren’t sure where it will come down.

Scientists say the risk of it killing anyone after it re-enters the planet’s atmosphere is small but not impossible, with report suggesting that there is a tiny chance the debris could hit New York, Los Angeles, Madrid, Rio de Janeiro, Beijing, or the Federal Capital Territory, Abuja.

Newsone understands that the experts, however, noted that it will more likely land in an ocean or the wilderness.

This online news platform recalls that a while ago, Nigeria’s Defence Space Administration (DSA), revealed that the country will adopt the use of space science technology in fighting insurgency – the biggest challenge of the West African giant at the moment.

The DSA noted that in contemporary times, science is required to effectively engage in warfare, adding that the Nigerian military will employ the use of space science technology to impact national security.

The scientist crash landed his rocket few seconds after takeoff in the presence of Science Channel production crew that was on-site documenting the launch.