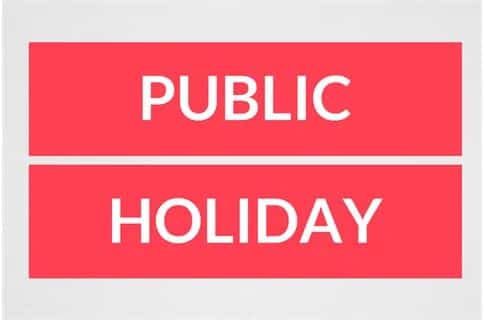 Public holiday has been declared in these states today.

Newsone reports that some states in Nigeria have declared today, Friday, May 14 as public holiday to continue Eid al-Fitr celebration

This online news platform recalls that the Federal Government led by President Muhammadu Buhari had on Wednesday 12th and Thursday 13th May 2021, declared public holidays to mark this year’s Eid-ul-Fitr celebration.


Newsone reports that Governor Abdullahi Umar Ganduje of Kano state, northern Nigeria, has declared Friday, May 14 a work-free day to enable Muslim faithful to continue with the Eid-el-Fitr celebrations.

The Kano state government said the decision to declare Friday work free was in consideration of the fact that Wednesday, May 12, which was part of the two-day Eid holiday declared by the federal government fell within the 30 days of Ramadan period.

The development, Newsone reports, was announced in a statement signed by Alhaji Isma’il Ibrahim, Public Relations Officer, Office of the State Head of the Civil Service, Alhaji Hussaini Kila, on Thursday in Dutse.

He quoted Kila as congratulating the Muslim Ummah on the celebration of Eid-el-Fitr on behalf of Gov. Muhammad Badaru.


The Public Relations Officer added that the head of the civil service urged the civil servants and the general public to use the period and pray for peace, stability and economic transformation in the state.