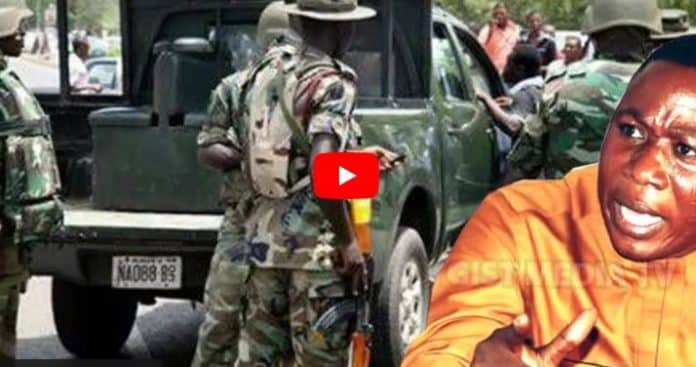 This online news platform understands that Sunday Igboho visited Igangan in Ibarapa North Local Government Area of Oyo state, on Monday, June 7, a day after the town was attacked by Fulani herdsmen.

Newsone Nigeria reports that Sunday Igboho was in the town to access the level of damage in Sunday’s attack, however, during the visit, Sunday Igboho also tried to comb the forest with his boys in search of the killer herdsmen.

Surprisingly, Sunday Igboho was, however, prevented from entering the forest by a team of fully armed soldiers, who were trailing his convoy immediately they arrived the town.

Newsone learned that 8 trucks of the Nigerian Army were behind Sunday Igboho’s convoy. This came after several Yoruba people were massacred by suspected herdsmen in Igangan and the palace of the Asigangan, the paramount ruler of the area was also burnt.