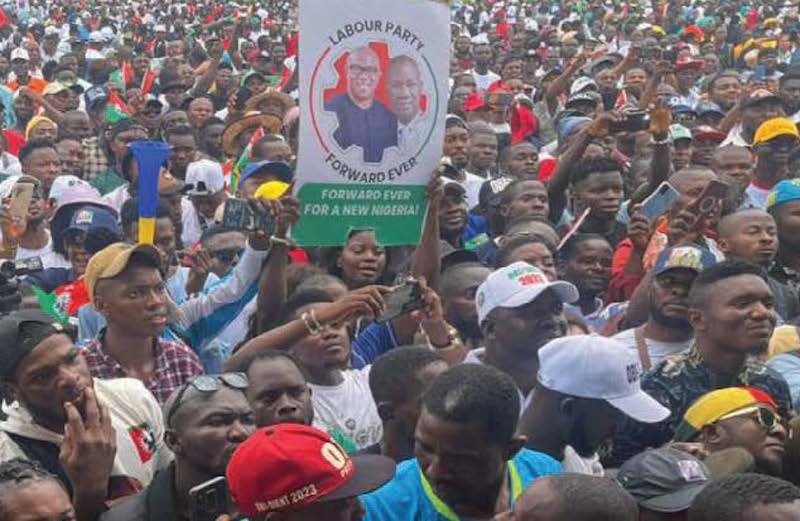 According to most Obedients across Nigeria and their online warriors, the Abuja Mega Rally that was held on 24th of September 2022, was “DA BOMB”. They believe with all certainty that based on what they saw and did yesterday in the Federal Capital Territory if the election were to hold today, Peter Obi would be declared the winner – one hand. While Obedients have continued to exploit every opportunity to demonstrate their optimism, banking on the Abuja rally to win the 2023 election is a joke taken too far. There is no doubt that the city of Abuja was shaken to its foundation yesterday by the Obedients Movement. However, the quest of Peter Obi to become the President of Nigeria come May 2023 is still a dream that may never come true.

I wish to begin by commending Obedients that the rally ended peacefully, with no tragic incidents, accidents or violence. Also, the fact that Nigerians from all walks of life came out in their numbers shows how Mr. Peter Obi and the “ideology” he projected has become popular amongst the youths. It also sends a clear message to the political establishment that the youths of Nigeria, especially in the middle belt and southern extraction of the country, are awake and are now organizing. They appear to be more desperate than ever to want a say in the collective destiny of the nation. Above all, the Abuja Mega rally is a testament to the fact that the Obedient Movement is not a South-East or IPOB “thing”. But Nigerians across the various ethnic and religious groups yearning for “TRUE” change are the real drivers of the Obedient Movement.

However, is the rally’s success an accurate yardstick for projecting Peter Obi’s presidency in 2023? The answer is capital NO. As I have said repeatedly, the odds are still against Mr. Obi going into the general election, and yesterday’s event has not changed my mind a bit. First, many of the “Obedients” I saw yesterday are frustrated Nigerians who want a change without having their PVCs handy. I randomly asked about ten “Obedients” if they got their PVCs ready, and only four out of ten answered in they have PVCs. The remaining six gave different excuses on why they don’t have PVCs, including lack of internet to complete online registration, repeatedly joining the PVC registration queue, and failing to obtain one. Some even claimed they missed the date for the PVC registration altogether. The fact that INEC records suggest that the Southeast and many Nigerian youths in the Middle-Belt and Southern Nigeria least participated in previous elections by way of PVC registration further gives credence to my little research.

This reminds me of Atiku’s claim that, despite the Obedient movement being fueled by social media in the South, most young people in the North do not use it. As a result, many people in the North are still unaware of Peter Obi’s identity or what the Labour Party stands for. Even in regions like Benue and Plateau, where it seems Obedients are gaining ground, the real voters in such areas tend to be the older men and women who work as farmers and market people in rural communities. And not the youths in the city of Makurdi or Jos using their phones to post Obedient videos and banners on social media. Therefore, when I said yesterday that the numbers, I witnessed during the Mega Rally could not fill the Abuja National Stadium, I was merely speculating what difference they may make when the chips are down during the general election.

This is where the issue of structure comes in. When we refer to structure, we refer to the political systems that connect a political party’s headship, leadership, and ideologies to the different segments of society, especially the rural people at the bottom of the table. So far, there is no evidence that Obedients are extending their influence into the most crucial areas, where the PDP and APC already have their presence solidly established since the return of democracy in 1999. This is why many people like me have remained skeptical about Mr. Peter Obi making any significant impact come 2023. The fact that rice, salt, pepper, and magi remain valuable commodities that politicians will use to woo rural voters, is certainly clear to anyone who wants to see, hear and listen that the battle remains between the APC and PDP. Mr. Peter Obi and his Obedient Movement are not in the picture.

We can shout all we want but until something drastic is done in the shortest possible time, I don’t see Mr. Peter Obi making any headway. His most viable option remains merging with Atiku and resolving the Wike Wahala. I believe Nigeria is in dire need of change, but I also don’t like deceiving myself, which is why I analyze the facts, so I am not carried away by social media hype. Mr. Peter Obi has done well for the political evolution of Nigeria, but he may not see the door of Aso Rock even if Obedients hold back-to-back rallies on the streets of Abuja.

Thank you for reading. To be continued…!