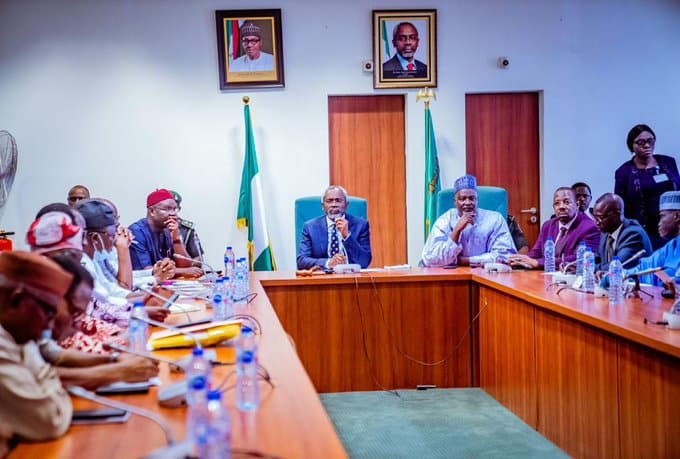 Lecturers have reached an agreement with the House of Reps over the ASUU Strike.

Newsone reports that the Academic Staff Union of Universities (ASUU) has reached a new agreement with the Federal Government through the House of Representatives.

This online news platform understands leadership of the House of Representatives brokered the new agreement after four hours of meeting at the National Assembly in Abuja, Nigeria’s capital on Tuesday, September 20, 2022.

However, the agreement is subject to the approval of President Muhammadu Buhari, who is currently at the United Nations General Assembly meeting at the UN.

Newsone Nigeria reports that ASUU President, Emmanuel Osodeke led the Union to the meeting, while the Minister of State for Education, Goodluck Opiah represented the federal government.

The Speaker of the House of Representatives, Femi Gbajabiamila, who chaired the closed-door meeting,  announced that the meeting produced some agreements, however, he did not state the agreement reached.

Speaker Gbajabiamila disclosed that the lawmakers will present the agreement to president Buhari upon his arrival, while ASUU is to do the same with their members.

“There were basically seven areas where ASUU has presented what we considered to be requisition for them to go back to strike. We have looked at the seven areas, we have more or less agreed on certain things.

“Once that is done, the leadership of this house will await the return of Mr President from the ongoing General Assembly. We will meet with Mr President. We will lay the agreement reached by the legislative arm of government. I am hopeful that Mr President will buy into the agreement and with that, I believe that this matter will be speedily brought to a close,” he said.

Newsone reports that the lawmakers will on Thursday meet with National Information Technology Development Agency, the Accountant General of the Federation, the Auditor General for the Federation and the National Salaries Incomes and wages Commission to discuss further.

Speaking during the meeting, the ASUU president said the issue will be resolved soon.

“It is a good development and we are waiting for what they will send to us to commit our members. We hope that within the immediate future, this issue will be resolved.”

The @HouseNGR Leadership, today in Abuja, held a meeting with ASUU Leadership with the aim of halting the protracted strike in public universities. pic.twitter.com/lAvyWb5Zf7