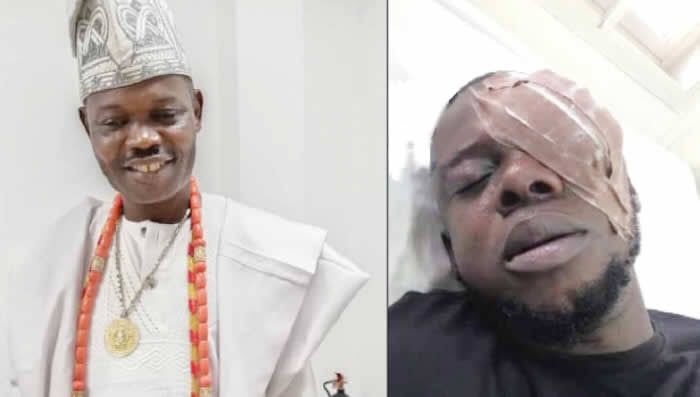 Fresh reports have emerged on how Nureni Oduwaye, a traditional ruler in Ogun State, South West Nigeria, who blinded Wasiu Oduwole, over claims that he danced with his Queen, is making moves to sweep justice under the carpet.

Newsone had reported that the monarch perpetrated the act on September 21, 2022, after accusing Wasiu of dancing with his queen during a birthday celebration at a hotel, an allegation repeatedly denied by the victim.

Oduwaye used his leg to kick the left eye of Wasiu, a graduate of Political Science, Ogun State University, and chef, who was contracted to prepare catfish pepper soup for guests of the party at Moore Blessing Hotel in Ikenne, Sagamu Local Government Area of the State, where the incident happened. Wasiu sustained a severe injury to his eye, causing permanent blindness.

Wasiu’s sister who Spoke with Newsone Nigeria on Thursday, decried how the monarch has been using his influence to get the law to support him.

According to her, Oduwaye, with the help of the Sagumu Area Commander, initiated a suit against the victim without serving him a notice and was granted bail by the court without their knowledge.

She said their lawyers have begun an investigation to unravel the petition the Monarch filed and why he was granted bail by the court.

Wasiu’s sister noted that the ‘unremorseful’ Monarch took the step after he had offered to pay him off when the matter was made public.

“He Is Still In Severe Pain”

When asked about Wasiu’s treatment, she said “he is currently at home, but still goes for his medical appointment at the Olabisi Onabanjo University Teaching Hospital in Sagamu. He has been discharged since it was confirmed that he can no longer see with the eye.”

“The eye still causes him severe pain,” she added.

Wasiu’s sister further noted that the incident has also put a hold on his means of livelihood, saying “he has been warned to stay away from flames which are core to his business of barbeque, pepper soup and so on.” 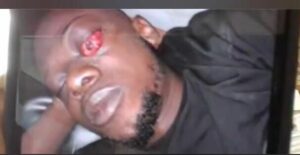 Current Status of the eye. 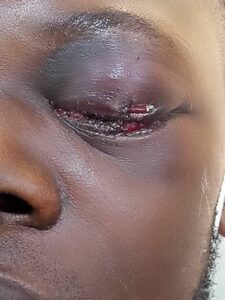 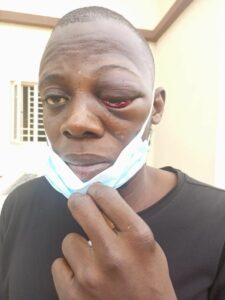 The victim, Wasiu has said he wants justice to be served irrespective of the Monarch’s status, appealing to relevant authorities, activists and all Nigerians to wade into the matter.

He also confirmed to Gatekeepers News that his lawyers have instituted a case against Oduwaye and the Magistrates’ Court in Sagamu, has fixed October 19, 2022, for the hearing of the matter.

Wasiu, confirmed the development to Gatekeepers News, explaining that he had offered to help his godfather prepare catfish pepper soup for the guests without any charge and he had visited the hotel to commence preparation when he realised that the ingredients provided were not enough.

“So, I decided to manage the ingredients because the distance of the hotel to the market is far. We were serving the guests when the owner of the hotel and the celebrant approached me and said the guests were complaining that the pepper soup was not well-nourished.

“I told him it wasn’t my fault and that the ingredients were not enough. After I was done with the cooking, I went into the bar, met the owner of the hotel, the celebrant, Iya Alaje, her husband, and a woman, who I never knew was a queen. I started apologising to them and I was told not to worry.

“The celebration was ongoing when the monarch, Nureni Oduwaye, entered. The deejay was playing and everyone was dancing. I was surprised as the celebrant and the queen were singing secular music. I commended them because people of their age and status don’t usually like secular music, let alone knowing the lyrics,” Wasiu said.

Wasiu said suddenly, the monarch asked him to identify himself and he said he was the younger brother of the owner of the hotel.

He explained that Oduwaye angrily left for his car, adding that the hotel owner and the husband of the celebrant ran after him, but Iya Alaje’s husband returned and instructed him to apologise to the monarch.

Wasiu said, “The queen was even asking what I did wrong but for the sake of peace, I went to apologise to him. When I got to where he was, I started begging him. I told him I was informed that he was annoyed because I was dancing with his queen and said I did not dance with her.

“As I was attempting to lie down to continue begging, he used his leg to kick my left eye. The injury in my eye was so severe that I was rushed to a nearby hospital from where I was transferred to the Olabisi Onabanjo University Teaching Hospital.”