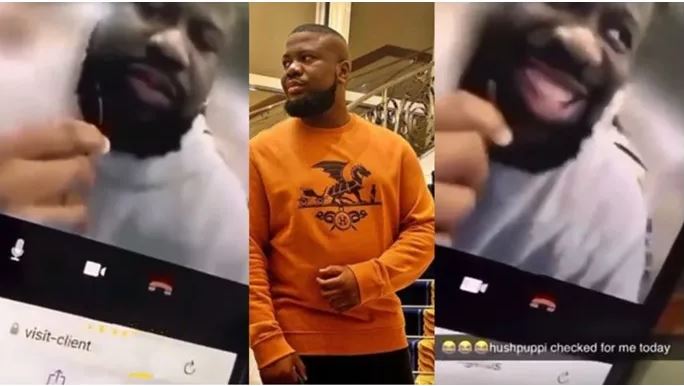 Video of Hushpuppi in prison has surfaced after being sentenced.

Newsone reports that convicted Internet fraudster, Ramon Abbas Igbalode, popularly known as Hushpuppi has appeared in a trending video chatting with a friend from a US prison.

This online news platform understands that the video of Hushpuppi in prison surfaced on the internet after a United States District Court sentenced him to the Central District of California.

Newsone Nigeria reports that the court sentenced Hushpuppi to 11 years and 3 months in prison for fraud on Monday, 7 November 2022. The social media personality was also ordered to pay $1.7m in restitution to two victims. Justice Otis D. Wright II sentenced Hushpuppi for money laundering conspiracy through several online scams and flaunting of a luxurious, crime-funded lifestyle on social media.

Hushpuppi, FaceTiming a friend in prison in the trending video, talked about his appearance. Video of Hushpuppi in prison seems to have been recorded weeks before the commencement of his trial.

In the trending Huspuppi prison video, the fraudster said that he was making an effort to look good so that he would not offend the judge and his friend kept laughing.

Watch the video of Hushpuppi in prison below…

VIDEO: Hushpuppi chatting with a friend while in prison.pic.twitter.com/iUxfyT5ylw

Meanwhile, in a statement issued by the court, the United States stated that Hushpuppi had bragged on social media about his lavish lifestyle – a lifestyle funded by his involvement in international fraud and money laundering conspiracies targeting victims around the world.

“This significant sentence is the result of years’ worth of collaboration among law enforcement in multiple countries and should send a clear warning to international fraudsters that the FBI will seek justice for victims, regardless of whether criminals operate within or outside United States borders.”

Newsone reports that Hushpuppi pleaded guilty in July 2021 and identified Deputy Commissioner of Police, Abba Kyari, as an accomplice in his $1.1 million scam.