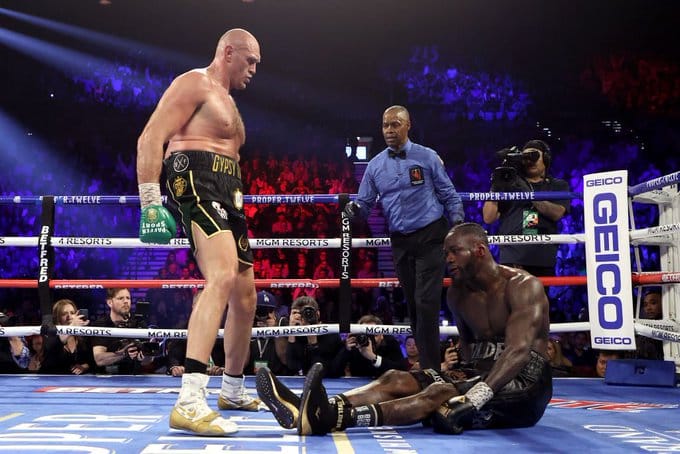 Tyson Fury, a British professional boxer, has produced a sensational performance to stop Deontay Wilder, an American boxer, in the seventh round in their rematch to win the WBC world title, making it the first loss in Deontay’s professional boxing career.

NewsOne Nigeria reports that Fury knocked Wilder down with a right hand over the top of his jab behind the left ear of the American boxer after which Wilder struggled to regain his equilibrium, with blood coming out of his mouth and ear

This online news platform understands that the American boxer then fell to the ground dramatically from a slip in the following round. Fury followed a left hook to the head in the fifth, with a hook to the body that sent Wilder back down to the canvas.

NewsOne Nigeria reports Wilder was trapped in the neutral corner in the seventh, and after taking two big right hands, the referee stopped the fight with the WBC champion’s corner set to throw in the towel.

The British Fury won every round in his rematch with the previously unbeaten American Wilder. The pair had drawn their first bout 15 months ago and Fury remains unbeaten after claiming the WBC world title.

Reacting to his loss, Wilder admitted that the better man won, saying:  “The best man won on the night. My coach threw in the towel but I’m ready to go out on my shield,” he said.

“I had a lot of things go on coming into this fight but it is what it is.

“I just wish my corner would have let me go out on my shield, I’m a warrior. But he [Fury] did what he did and there’s no excuses,” the defeated boxer said.

Also speaking after the bout, Fury hailed Wilder for a good fight and being a “warrior”, saying: “I want to shout out Deontay Wilder, he showed the heart of a champion. He got up and battled onto round seven. He is a warrior, he will be back and be champion again,” the new world heavyweight champion stated.

“But the king has returned to the top of the throne,” the heavyweight king said.