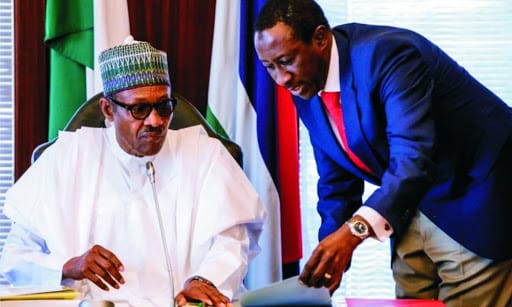 NSA Monguno, the National Security Adviser (NSA), whose full name is Babagana Monguno, has gotten a new appointment from President Muhammadu Buhari, days after clashing with Abba Kyari, the Chief of Staff to the President.

NewsOne Nigeria recalls that the Office of the NSA in a circular accused Abba Kyari, the Chief of Staff to the President of hijacking a role legally assigned to Monguno. The Chief of Staff was also accused of completely sidelining Monguno in the scheme of things when it comes to the strategic decisions in national security operations.

A letter by NSA Monguno to the Chief of Staff was leaked to the media by unknown persons, in the letter, Monguno said Kyari’s directives to service chiefs were sometimes issued without the knowledge, much less approval of the president, a practice he said has added to government’s failure to contain insecurity.

“Chief of staff to the president is not a presiding head of security, neither is he sworn to an oath of defending the country,” Mr Monguno, a retired major-general, said in the December 9, 2019, letter.

“As such, unprofessional practices such as presiding over meetings with service chiefs and heads of security organisations as well as ambassadors and high commissioners to the exclusion of the NSA and/or supervising ministers are a violation of the Constitution and directly undermine the authority of Mr President.

“Such acts and continued meddlesomeness by the chief of staff have not only ruptured our security an defence efforts but have slowed down any meaningful gain that Mr President has sought to achieve,” the memo read.

However, days after the rift, Monguno has gotten what seems like a fresh Presidential endorsement just a week after his stinking memo to the Chief of Staff was leaked to the media.

In a presidential statement sighted by NewsOne Nigeria, NSA Monguno was named Co-Chair along with Humanitarian Affairs Minister for the newly formed National Humanitarian Coordination Committee.

A source in the presidency who is familiar with the development said NSA Monguno’s appointment is an “indication that the President has no issues with the contents of the memo,” even though there are concerns in the Villa on how the memo was leaked.”