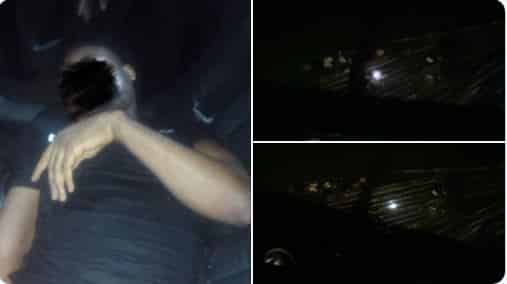 Another man has alighted from an UBER car and jumped into the Lagos Lagoon on the Third Mainland axis.

NewsOne Nigeria understands that the sad incident is coming less than two weeks after Daibo Davies, a resident of 17, Sosanya street, Soluyi, Gbagada, Lagos, also dived into the lagoon from the third mainland bridge.

The man was said to have jumped into the Lagoon around midnight on Wednesday, February 26. But unlike Davies who lost his life, the man who attempted suicide on Wednesday was rescued by officials of the Rapid Response Squad (RRS), a unit of the Lagos state police command.

In a post on the micro-blogging site, Twitter on Thursday, the RRS said the young man insisted that the driver must pass through the third mainland bridge.

As the driver got to the bridge, the man was said to have told him that he was pressed and needed to ease himself. Sensing danger, the driver drove close to the section where officials of the RRS were stationed.

It was learned that the driver was said to have approached the officers to inform them about the unusual action of his passenger. The passenger then jumped from the car into the lagoon and reportedly landed on floating wood beneath the bridge.

The passenger was said to have been rescued and taken to a hospital.

“On getting to the bridge, he asked me whether this was Third Mainland Bridge and I answered yes,” the RRS quoted the driver to have said.

“He told me that he was pressed and that I should wait for him to ease himself. I was curious. At this time, he was forcing to me wait.

“I stylishly drove him to the point where Rapid Response Squad (RRS) were standing inward Lagos.

“I practically told him I was no longer interested in the trip before I approached the police officers leaving him inside the car.

“Before he jumped, one of the police officers who saw him approached the railings of the bridge and persuaded him not to jump.

“He was thereafter taken to Lagos State Teaching Hospital from where he was referred to LUTH. The incident was reported at Adekunle Police Station, Yaba.”

Last night RRS officers on 3MB helped rescue this man who attempted suicide by diving into the lagoon. He alighted from a call cab saying he wanted to urinate but jumped off the Bridge. Luckily he landed on the log of wood in the lagoon before being rescued to the hospital. 👇 pic.twitter.com/KYdsjGRB4J