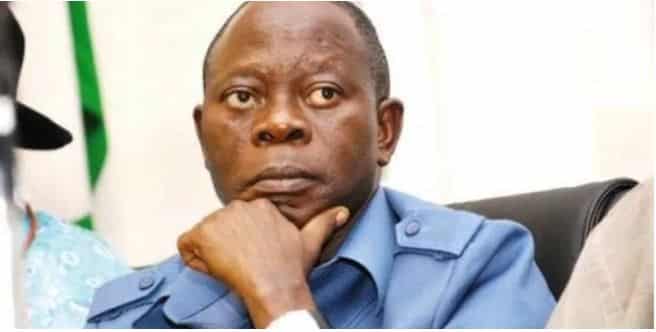 Adams Oshiomhole suspension as the National Chairman of the All Progressives Congress (APC), Nigeria’s ruling political party, has been reversed by a  Federal High Court sitting in Kano, northern Nigeria.

NewsOne Nigeria reports that the presiding judge, Justice Lewis Allagoa of the Federal High Court sitting in Kano, northern Nigeria, who set aside the ruling, thereafter, ordered the police and Department of State Service (DSS) to provide security for Oshiomhole, to enable him to return to his office.

This burgeoning online news platform understands that this is coming after that Justice Danlami Senchi of the FCT high court in Abuja on Wednesday delivered a ruling on an application for an interlocutory injunction where he ordered Oshiomhole to be suspended pending the determination of the main suit seeking his permanent removal.

NewsOne Nigeria understands that the court held that the ruling political party wrongfully continued to retain him as its National Chairman while he is under suspension as a member of the party.

The presiding judge, therefore, ordered the chairman of the APC to stop parading himself as the National Chairman of the party and directed the party to cease acknowledging him in that regard.

Justice Senchi also ordered the party to deny him access to the party secretariat. Which prompted the Nigeria Police to take over the APC Secretariat building thereafter.