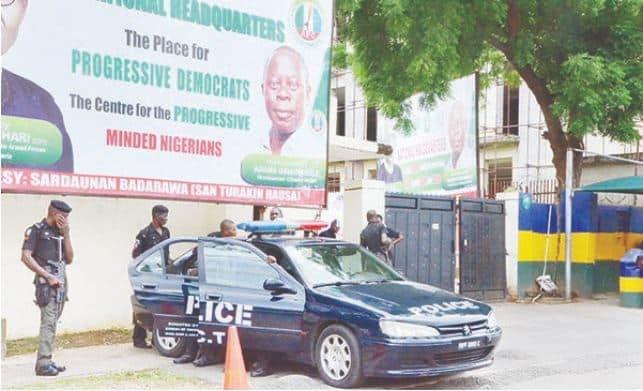 NewsOne Nigeria reports that the development is coming two days after the National Secretariat of the All Progressives Congress (APC), Nigeria’s ruling party, was sealed based on orders of the Inspector General of Police (IGP), Mohammed Adamu.

This reliable online news platform understands that as early as 9 am, two Hilux patrol vans and two Peugeot 604 cars were stationed at strategic positions around the secretariat. It was learned that APC staff members, who had arrived early, were asked to move out of their offices.

The second seal off of the APC National Secretariat over the ongoing APC crisis was at the instance of the Inspector General of Police, who also directed the Commissioner for FCT Police Command to ensure that nobody was allowed into the premises.

Meanwhile, this is coming after Victor Giadom led National Working Committee (NWC) got the Presidential backing on Tuesday to convene National Executive Committee(NEC) which holds today virtually from the Presidential Villa, Aso Rock.

The Senator Abiola Ajimobi led NWC faulted the convocation of the APC NEC, which was described as illegal. Ajimobi’s NWC insisted that it won’t attend the NEC despite the expected presence of President Muhammadu Buhari.