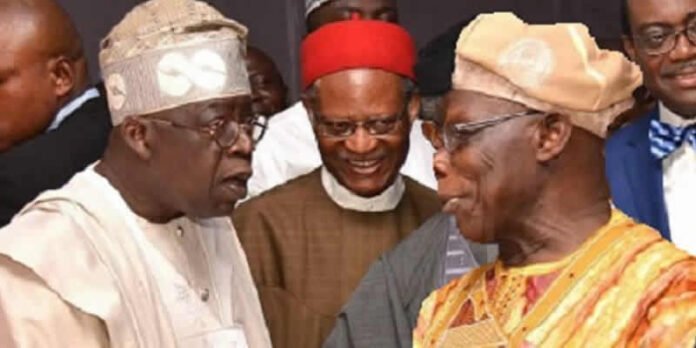 Newsone Nigeria reports that the national leader of the All Progressives Congress (APC) and former governor of Lagos State, Bola Tinubu, said the withholding of allocation to Lagos State by former President of Nigeria, Olusegun Obasanjo during his time as Lagos governor, challenged his administration’s creativity to be self-sustaining and made Lagos now the fifth largest economy in Africa.

The APC National Leader made this comment in Akure, the Ondo state capital on Saturday where he commissioned the newly built edifice of the Ondo Internal Revenue Service and praised Governor Rotimi Akeredolu sang that he yidone more than talk development as well as dedicated himself and his administration to bringing development to the state.

Tinubu said Akeredolu has recorded several laudable projects including the Ore Industrial Hub, progressive agricultural empowerment amongst others, adding that Akeredolu would not have achieved such successes without the proper collection of taxes.

According to him, “Governor Akeredolu is to be commended for leading the state along this intelligent path of the agricultural revolution. As such, you should repose even greater confidence in him. There is no doubt that Ondo State will be better for it at the end of the day. He has also embarked on important social welfare programmes.

“The COVID-19 pandemic has revealed the wisdom of his viewpoint for we must do more to improve our public health system. Your governor has pledged to establish an efficient system where all the people in this state will be given clear access to basic health care. If we are truly intent on forming a progressive society, the government must lead the way in providing fundamental health care to those who cannot afford it themselves.

“But these laudable projects and ideas can only be realized in an atmosphere of unity of vision and action. Indeed, the governor cannot push forward nor can the state advance if there are division and dissension among us. Unity and adherence to collective purpose are hallmarks of progressive politics. Our ability to place the public welfare above our personal ambitions is what differentiates us from the political regressives who would rather that the general welfare suffer so they can fulfil their personal whims and wishes.

“As progressives, we must carefully tend to our bridge of unity. We must never allow it to break. We entered politics and governance to serve the people and this purpose should always bind us in ceaseless fraternity and togetherness. All true progressives must work towards this fertile unity and sustain that unity. With it, we can achieve the great things we see for this state and this nation. We can build a progressive society for ourselves and our children. Without that unity, we will forever be in a blinding fog, so much so that we will be fighting friend and foe alike because we will be too confused to know the difference between the two. This is no path to greatness. It is the path to stagnation.

“Lets us commit ourselves to progressive unity to bring forth a progressive society. There is no other way for this nation to go. We must bring all our people back under the same progressive tent. Our creed is one of public service. This service is blind to region, religion, ethnic group, or place of origin. We seek prosperity, safety, hope, and the tranquil enjoyment of life for everyone, for all Nigerians. No one is to be denied. No one is laid low or shunted aside. No one is to be broken. Those who have been broken or forgotten are to be welcomed and care for. Those in need are to be comforted and helped. This is what the APC is and what the APC shall always be.

“For us as progressives, tribalism, and sectionalism are not part of our working vocabulary. Those are the words of yesterday. We all must work together and forge ahead as one if we are to attain the country’s overall development goals.”