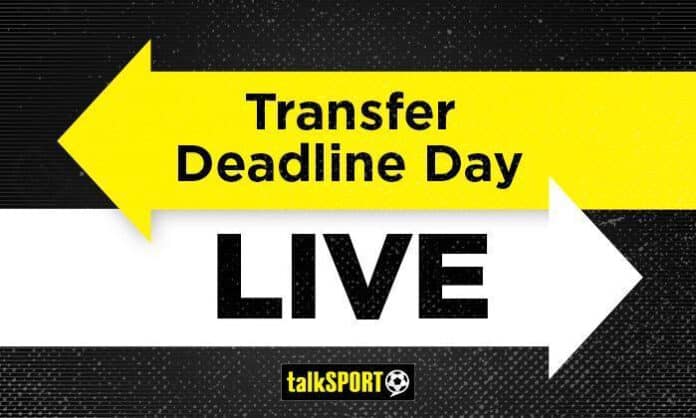 22:41. Theo Walcott has returned to Southampton on loan from Everton.

23:29. Thomas is no longer an Atletico Madrid player after his representative left the LaLiga offices following the depositing of his buyout cause. Arsenal is his next team.’

23:10. Barcelona have reached an agreement with Benfica to loan Todibo for the next two seasons. The Portuguese side will pay 2m euros for the loan, and have an option to buy of 20m euros.

22:58. Edinson Cavani has joined Manchester United on a free transfer.

22:30. Thomas’ move to Arsenal is almost complete with his representative arriving at LaLiga headquarters to deposit his buyout clause. FULL STORY HERE.

22:20. Rafinha is heading to PSG to take a medical in order to complete a move to the Ligue 1 champions. He wasn’t in Koeman’s Barcelona plans and the club have let him leave for France. FULL STORY HERE.

22:05. Hertha Berlin have announced the signing of Matteo Guendouzi on loan for a season, which will likely make room for Thomas Partey to join the Gunners from Atletico.

21:38. Chris Smalling has rejoined Roma, The Giallorossi will pay Manchester United 15m euros plus add ons for the defender.

21:17. Barcelona have been dealt a blow as their move for Eric Garcia has broken down. FULL STORY HERE.

20:42. With the likely departure of Thomas from Atletico, the Rojiblancos have earmarked Jose Gomez Campana from Levante as a possible replacement. The midfielder has a release clause of 60m euros, but he could be allowed to leave for 30m euros.

20:22. Jose Callejon has joined Fiorentina on a free transfer after his contract with Napoli expired.

19:43. Rafinha could be on his way out of Barcelona, with Mundo Deportivo reporting that PSG are infested in his services.

19:36. Chelsea’s Tiemoue Bakayoko has joined Napoli on loan for the season.

19:21. Manchester United have confirmed the signing of Alex Telles from Porto.

19:14. Federico Chiesa has joined Juventus on loan from Fiorentina, with the Bianconeri also agreeing an option to buy of 40m euros.

19:07. Thomas Partey could be set to join Arsenal, and is apparently on his way to London to sign for the Gunners. The deal is expected to be worth 50m euros.

18:44. After the signings of Idrissi and Rekik, Sevilla sporting director Monchi has announced there will be no further moves to the club.

18:22. Bayern have announced another signing, this time it is Bouma Sarr who has joined there German giants from Marseille.

18:05. Sevilla have announced the signing of Karim Rekik, so joins from Hertha Berlin.

17:42. Juventus have said goodbye to Mattia De Sciglio who leaves the club to join Lyon.

17:27. Just as it looked like Napoli’s Fernando Llorente would be staying in Italy with Sampdoria, Athletic Club have emerged as a potential destination for the striker as we revealed on Radio MARCA.

16:47. Real Valladolid have signed Jota from Benfica on a one-year loan. The winger is currently with Portugal’s U21s and will join up with his new club next week.

16:39. Olympiacos have confirmed the arrival of Bruma, who arrives on loan from PSV Eindhoven with a purchase option.

16:30. In addition to announcing the signing of Eric Maxim Choupo-Moting, Bayern Munich have also just announced the arrival od Douglas Costa. He previously played there between 2015 and 2017.

16:16. Inter want to bring Victor Moses back to the club and are in talks with Chelsea, but the negotiations are proving difficult according to La Gazzetta dello Sport.

16:04. Eric Maxim Choupo-Moting just lost the Champions League final with PSG and now, with his contract having expired, he has joined the European champions. Bayern Munich have just announced the transfer.

15:57. Manchester United are looking to strengthen and are already closing in on deals for Edinson Cavani and Alex Telles. They’ve also now been linked with Atalanta’s Amad Traore by Sky Sports.

15:45. Atletico Madrid have confirmed the exit of Nicolas Schiappacasse, who was consistently shipped out on loan. He now leaves to join Sassuolo.

15:31. Elche have been looking to strengthen in attack and it looks like they’ll do so with Guido Carrillo. The striker is already in the city.

15:20. According to the Corriere dello Sport, Pau Lopez will join Everton.

14:55. Gerard Deulofeu is set to swap Watford for Udinese, making a return to Serie A.

14:10. Sevilla have loaned Alex Pozo to Eibar as they were in need of a right-back.

14:05. Fernando Llorente is set to sign for Sampdoria, according to Calciomercato. That’s a blow for Elche, who were trying to bring him in.

13:55. According to the BBC, Yaya Toure could be coming to LaLiga Santander to sign for Cadiz. He is currently a free agent.

13:50. Jose Callejon is set to stay in Italy, with Fiorentina set to bring him in.

13:40. Luca Zidane has completely left Real Madrid, after being on loan at Racing Santander last year. He is staying in the second tier, having signed for Rayo Vallecano on a two-year contract.

13:35. Valencia president Anil Murthy has said that there won’t be any more exits this window.

13:25. Jese’s future is up in the air. He is still at PSG, but isn’t in Thomas Tuchel’s plans. According to Onda Cero, he could be an option for Elche if they don’t land Fernando Llorente.

12:55. Nikola Kalinic is currently on Atletico Madrid’s books, but isn’t in the first-team plans. He is set to leave, having agreed terms with Hellas Verona.

12:40. Sevilla have officially announced the signing of Oussama Idrissi.

12:35. Matteo Darmian has arrived at Inter on loan, with a purchase option.

12:10. PSG might not be finished yet. They’re going to make a final push for Dele Alli, according to Sky Sports.

11:50. PSG have officially announced the loan of Danilo Pereira., who arrives from Porto.

11:30. It has been a busy summer at Chelsea and that is continuing with some exists. Tiemoue Bakayoko is set to join Napoli on loan this deadline day and Victor Moses is to complete a new transfer to Inter.

10:50. There’s only one day left for Jean-Clair Todibo to leave Barcelona. He is very close to Fulham and could leave on a permanent transfer, although a buy-back option could be added to the operation.