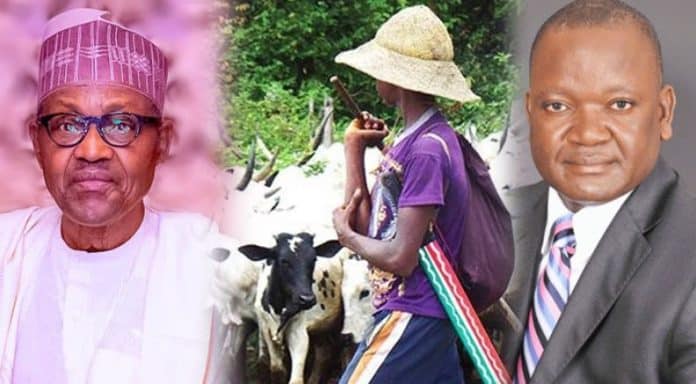 Ruga must be adopted in Benue if Ortom wants peace, Buhari has said.

NewsOne Nigeria reports that the Presidency has said that if Governor Samuel Ortom of Benue state, wants peace in the northcentral Nigeria, he should cooperate with President Muhammadu Buhari’s regime by accepting Ruga and other policies.

This online news platform understands that the Senior Special Adviser to the President on Media and Publicity, Garba Shehu who made this statement, claimed the recent spate of insecurity ravaging the state resulted from Governor Ortom’s rejection of Ruga settlements.

The comment of the Presidential spokesman came on the heels of the killing of Benue residents on Tuesday by killer herders. While reacting to the Tuesday violence, Mr Ortom had said Mr Buhari’s “action and inaction” was responsible, accusing him of Fulanisation of Nigeria.

However, in a statement on Thursday, the Presidential spokesman claimed the governor’s refusal to adopt the controversial Ruga policy showed he did not value people’s interest.

NewsOne Nigeria recalls that Governor Ortom  had rejected the policy describing it as deceptive and against the interest of Benue indigenes, who are predominantly farmers.

“Benue under the Ortom administration ought to cooperate with the federal government in the implementation of a number of national strategies programmes in addressing underlying issues militating against peace, progress, and development.

“This can still get done when the interest of the people is placed above all other interests. A government voted into office by the people should treat the people as its masters and not as its servants,” said the statement.

“As Nigerians, we accuse colonial rulers of the policy of divide and rule.