Home Politics 2023 Election: What Igbo Presidency Will Do To Nigeria – Ohanaeze Ndigbo 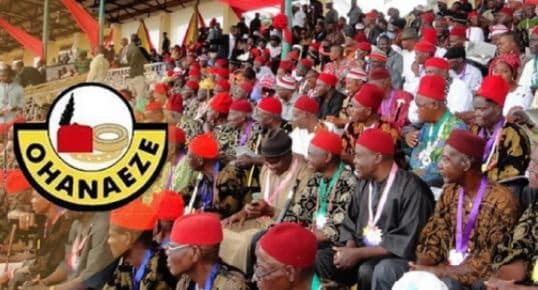 Ohanaeze Ndigbo has revealed what Igbo Presidency in 2023 election will do to Nigeria.

Newsone reports that Ohanaeze Ndigbo, an apex socio-cultural organization in Igboland, has reaffirmed the belief of the Igbo people in the unity of Nigeria.

This online news platform understands that the President-General of the group, Professor George Obiozor in a Christmas and New Year address presented at a press conference held in Owerri, the Imo State capital, insisted that the Igbo nation seek justice as, throughout history, those denied justice have had no interest in peace.

Obiozor also maintained that a Nigerian President of Igbo extraction has become imperative and an idea whose time has come, adding that it is a national necessity that is anchored on equity, justice and fairness.

The Ohanaeze Ndigbo President-General further reiterated that a Nigerian President of Igbo extraction is politically justifiable and morally defensible, positing also that it would heal and unite the nation.

Newsone Nigeria reports that Obiozor disclosed that Ohanaeze Ndigbo will soon announce a political action committee to canvass for the support and understanding of other Nigerians towards the actualization of a President of the Igbo bloc.

According to him, “be not discouraged, the Igbo struggle for Justice, equity and fairness in Nigeria has been long and agonizing but there is light at the end of the tunnel.

“As Nelson Mandela said, it looks impossible until it is done. With the new narratives of courage without rancour wisdom without humility, we will be able to persuade our fellow Nigerians that it is time to reintegrate Ndigbo effectively into the mainstream of Nigerian political process and governance. This is in the national interest.”

The Ohanaeze Ndigbo President-General expressed dismay that Igbo talents and ability to turn adversities into advantages, obstacles into opportunities and difficulties into dividends have been misrepresented as attempts at domination hence confronted with anger, hostility and violence at any given crisis in Nigeria and even outside the country.

He partly stated, “In fact, no people in recent history have been unfortunate or at best had a mixed fortune or blessings as Ndigbo in Nigeria politics and governance. For example, quite often the Igbo energy and enterprise were misunderstood as being over-ambitious.

“In 1999, the country for the purpose of healing the Nation and creative use of crises and conflicts yielded the Presidency to the South West. I ask Ndigbo everywhere from today to make every effort to convince other Nigerians in Political parties and organizations that ours is a righteous cause whose time has come”.