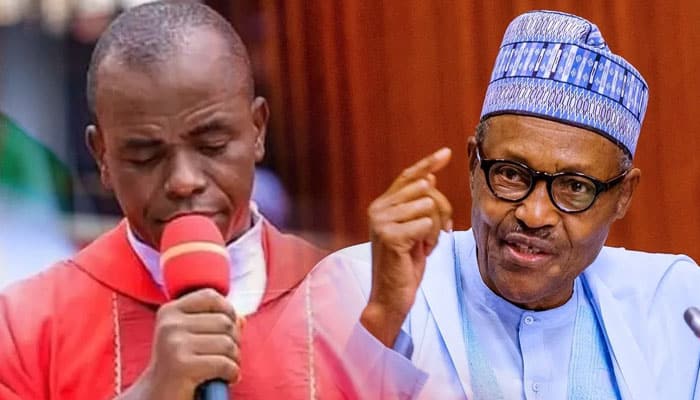 Father Mbaka has revealed what will happen to Buhari and APC.

NewsOne Nigeria reports that the Spiritual Director of the Adoration Ministry (AMEN), Rev. Fr. Ejike Mbaka, has raised the alarm that disaster was lurking in Nigeria.

This online news platform understands that controversial Catholic priest who made this comment while delivering his homily in a video which had gone viral, warned clerics in the country not to make themselves an instrument of disaster by joining anybody to protect those killing the poor.

Father Mbaka further stated that no amount of the blocking of the National Assembly and security in Aso Rock Villa would secure the country “if they don’t take care of youths and give them jobs, and address all these issues the Holy Spirit raised on that Wednesday.”

READ ALSO: Father Mbaka Reveals Details Of The Contract He Asked Buhari For

The controversial Catholic priest warned the All Progressives Congress (APC) government led by President Muhammadu Buhari that he (Mbaka) would be the last person they would fight, adding that “heaven’s anger would fall on them should them try it.”

Mbaka warned the regime of Buhari that he would be the last person they would fight, adding that should they (FG) fight him, the anger of heaven would fall on them.

The Catholic priest said, “The last person this administration should fight is Father Mbaka because if they speak against me, the anger of heaven will be upon them and how they will end will shock everybody.

“So, when my children are crying I cannot be silent,” he said, noting that it wasn’t the first time he would be speaking against bad governance of this regime.”

The cleric revealed that the Presidency was attacking him because he blessed, Nnamdi Kanu, leader of the proscribed Indigenous People of Biafra.

“If they are worried that I am blessing Nnamdi Kanu, wherever he is, God is blessing him. He is breathing; that he sleeps and wakes up, is it not blessing? Or is he not my brother? Spiritually, is he not my son? So what is their problem? They are busy branding people and communities terrorists. “If what is happening in Kaduna, Kano, Nasarawa, Maiduguri, Benue, Niger; if all these places are branded terrorist states, will the whole Nigeria not be branded a terrorist country? If anybody says the truth, the person becomes a terrorist.

“They should be careful because the insecurity I am talking about can affect them. Even the Shehu Garba who is talking, the bandits can come and kill him,” he added.

Newspaper Headlines From Nigerian Dailies May 4, 2021