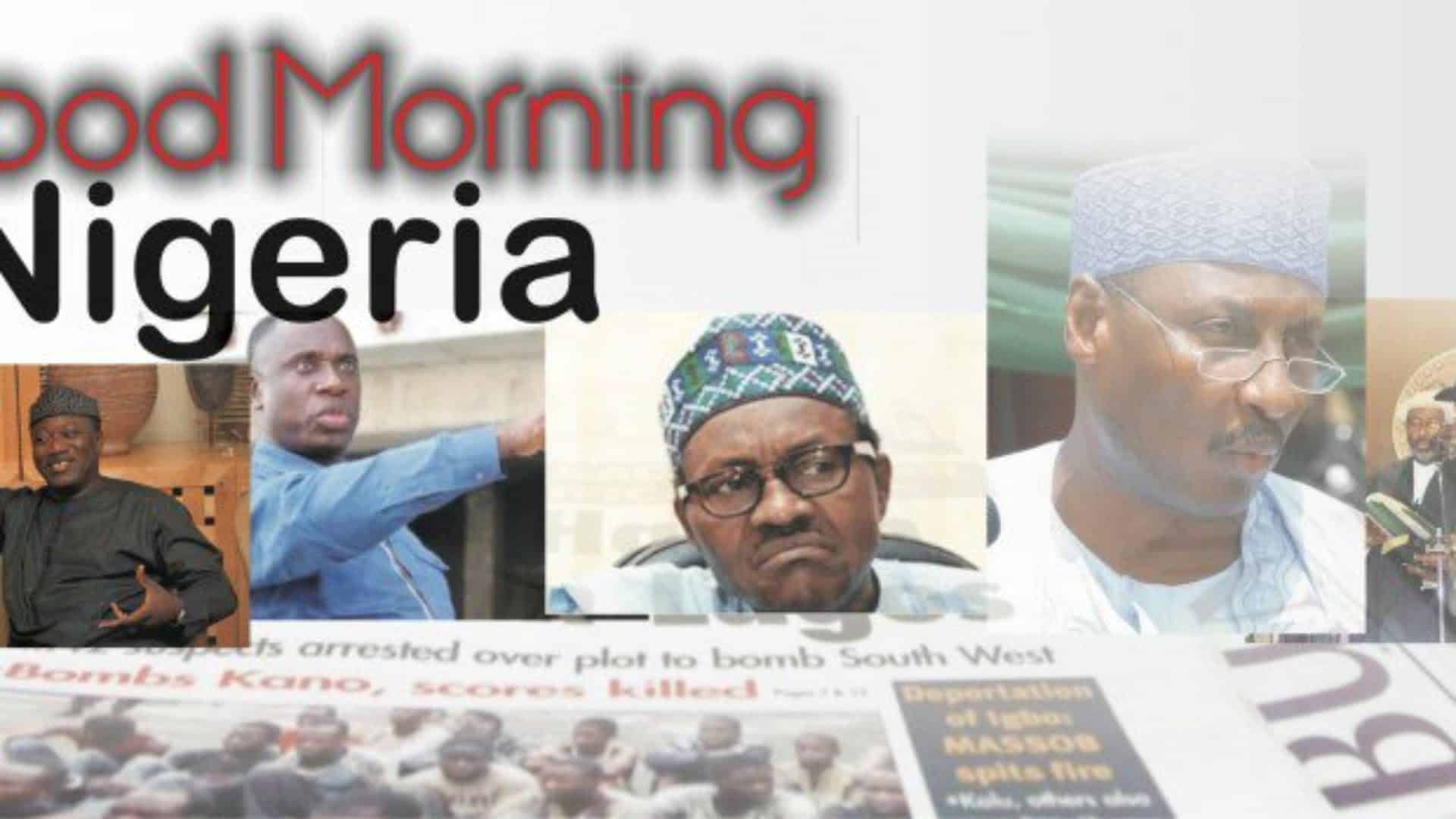 1. President Muhammadu Buhari has reiterated that he would leave Nigeria a safer country by the time he exits office. He gave the assurance during the Emblem Appeal Launch for the 2023 Armed Forces Remembrance Day celebration at the Council Chambers of the Presidential Villa, Abuja, yesterday.

2. No fewer than 9 members of a family were killed by gunmen in Maikatako community of Bokkos Local Government Area of Plateau State on Tuesday. It was gathered that the gunmen stormed the community in the night and started shooting sporadically, leaving nine people dead. A community member confirmed that the incident occurred at about 9:30am when the villagers were going to sleep.

3. Former UFC middleweight champion, Israel Adesanya, has reportedly been arrested for taking brass knuckles through security and John F. Kennedy Airport in New York. The 33-year-old, who lost his title by TKO to Alex Pereira in New York last Saturday, was arrested by Port Authority police in the American Airlines terminal on Wednesday.

4. The Senate yesterday resolved to provide legislative support for the new policy of the Central Bank of Nigeria (CBN) to redesign the Nigerian Naira. The Senate has mandated its Committee on Banking, Insurance, and other Financial Institutions to embark on an aggressive oversight to ensure that Nigerians are adequately protected from the CBN, Banks, and other agencies involved in the process.

5. Former President, Chief Olusegun Obasanjo on Wednesday hosted the leaders of the Yoruba Council of Elders (YCE). The delegation, led by Chief Ajibade Oyekan, discussed the growth and development of the South-West region.

6. The Ghanaian government on Thursday Ghana denied issuing a travel advisory to its citizens to keep away from Abuja, the capital of Nigeria. A notice circulating since Wednesday evening bears the name and logo of the Ministry of Foreign Affairs and Regional Integration. In a tweet Thursday morning, the government declared that the statement was not authorized.

7. Senator Bola Tinubu, Presidential candidate of the All Progressives Congress (APC), has dismissed the allegation that he has no regard for Christians. At an interactive session with the leadership of the Christian Association of Nigeria (CAN), Tinubu dismissed those who described him as a religious bigot, saying the choice of Shettima had nothing to do with religion.

8. Brigadier-General Audu Ogbole James, Director of Finance at the Nigerian Armed Forces Resettlement Centre (NAFRC), Oshodi, Lagos, is dead. The General lost his life after a corporal identified as Abayomi Edun crushed him at the barracks on Tuesday night.

9. The Federal Government has insisted that lecturers will not be paid for work not done in line with the ‘No work no pay’ policy. Minister of Education, Malam Adamu Adamu, said this while commenting on the protest of the Academic Staff Union of Universities (ASUU) over pro-rata October salary payment.

10. The Director-General of the Peter Obi Presidential Campaign Council, Doyin Okupe, has said the analysis of the Governor of Anambra State, Charles Soludo, on the chances of Obi in the 2023 elections made no sense. Okupe, who spoke on Tuesday during a TV interview said Soludo’s comment on Obi was a joke. According to him, Soludo is not politically sound.