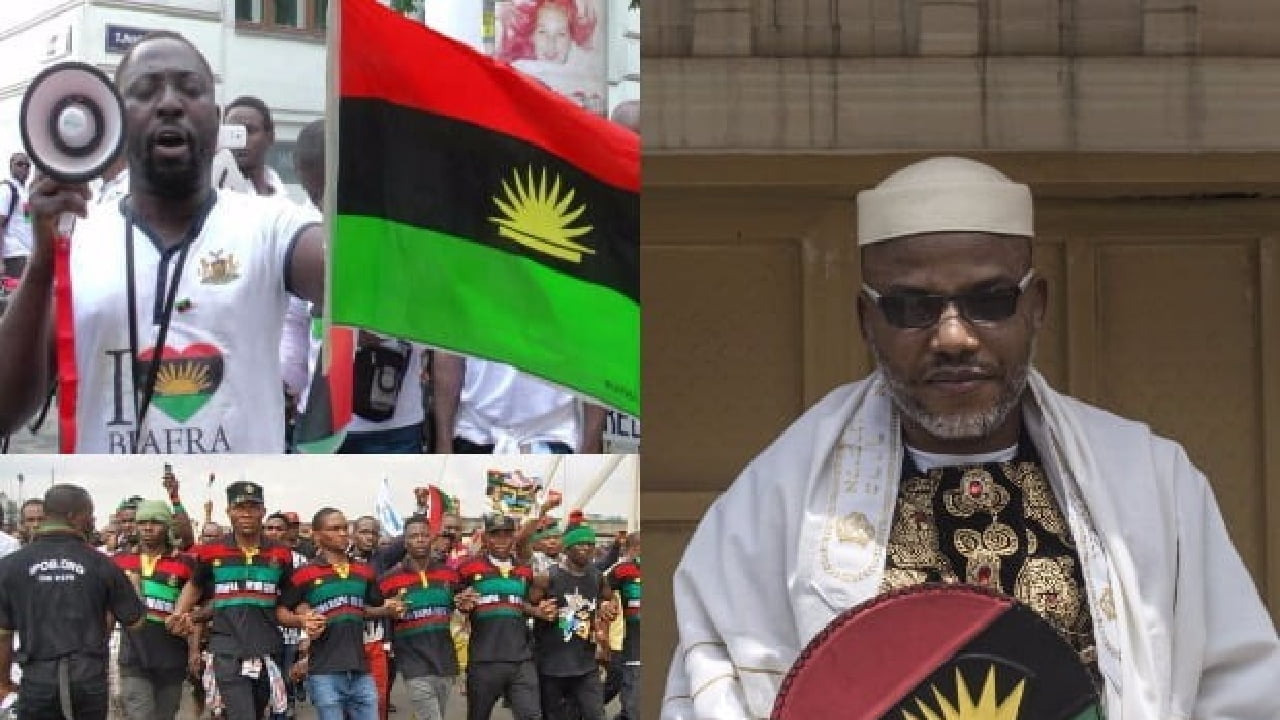 Newsone has compiled the latest Biafra news today, which means the latest news about Biafra activist Nnamdi Kanu and other Biafra groups such as the IPOB, MASSOB, BIM, and BNL.

The Indigenous People of Biafra has urged the Anambra State Governor, Prof. Chukwuma Soludo, to desist from using Ebubeagu militia, including vigilantes against innocent people in the state.

This is just as the pro-Biafran group insists that Soludo secretly set up Ebubeagu in Anambra, and nicknamed them vigilantes while using it to eliminate IPOB members.

The group made these claims in a statement on Wednesday by its Media and Publicity Secretary, Emma Powerful.

Stating that the true intention of the governor through Ebubeagu has been revealed, the group further stated that the governor should be held responsible for whatever happened in the state as they warned to stop using the militia in profiling Biafrans and eliminating them simply because they have paintings or tattoos on their body.

Advertisement
The statement read in part, “Our attention has been drawn to the reckless and unjustifiable murder of innocent citizens of Biafra in Anambra State, by the secret militia and Ebubeagu security outfit created by the state governor.

Nigerian-born American lecturer, Uju Anya, has been in the eye of the storm since her tweet wishing the late Queen Elizabeth   II ‘excruciating death’. The professor of Second Language Acquisition, Department of Modern Languages, Carnegie Mellon University, United States of America tells GODFREY GEORGE she spoke from a place of deep pain and is unapologetic about her post.

Your tweet wishing the late Queen Elizabeth II an ‘excruciating death’ sparked outrage from many quarters around the world. Are you regretful you made that post?

You mentioned that your ancestors suffered in the Biafran war, for which you hold the British responsible. Can you give some details of the kind of experience your people went through?

It was not just my ancestors, but also my immediate and living relatives. There were family members who died but there are also people who are still alive today who survived the genocide. This is because this is a very recent history and a recent memory. The war ended in 1970, and many people who witnessed it are still alive today. I was born in ’76 and I lived in the aftermath of the war. My family suffered and some died. It was traumatic. My parents are dead now, but I have siblings alive today who went through Biafra as children. They were under the age of 10. Our family also has a war baby. My mother was pregnant during the war and gave birth to my second oldest brother in Biafra. So, this is something that is extremely close to me, and it is in my personal existence and in addition to the overall history of my family and the broader history of the Igbo people.

Newsone reports that Ifeanyi Ejiofor, counsel to Nnamdi Kanu, the detained leader of the proscribed Indigenous People of Biafra (IPOB), has said his client has been diagnosed with a gastrointestinal disorder.

This online news platform understands that the news of Nnamdi Kanu being critically sick in DSS custody was made known in a statement issued on Monday, September 19, 2022.

Barrister Ejiofor in a statement on Monday said the development followed persistent heartburn earlier experienced by the secessionist leader, who has been in custody for months now.

According to Nnamdi Kanu’s lawyer, despite the order of Justice Binta Nyako of a Federal High Court in Abuja that Kanu should be given serious medical attention, the Department of State Services, DSS has been acting on the contrary.

Metuh, who was also the PDP National Vice-chairman (South East) demanded unconditional freedom for Nnamdi Kanu, stressing that such will restore peace and normalcy to the South East region with a multiplier positive effect on the entire country.

The former PDP Spokesperson who stated this in a statement on Sunday also decried the “maltreatment and systemic extortion” of South Easterners by unscrupulous operatives in security agencies and government establishments.

According to Metuh, “in the light of the deplorable security situation in the South-East, there is need for unconditional freedom for Nnamdi Kanu to restore peace and normalcy to the region. Peace in the southeast will have a multiplier effect in the entire country.

“The truth is that many people are not happy with the way and manner Mazi Nnamdi Kanu was abducted in a foreign country and brought to Nigeria in chains to face all kinds of charges. Nnamdi Kanu is viewed by many as suffering for highlighting the plight of the Igbos in present Nigeria”, he said.

The detained leader of the Indigenous People of Biafra, Nnamdi Kanu, has received his legal team in the custody of the Department of State Services and expressed optimism that the terrorism charges against him will be quashed by the Court of Appeal.

The legal team on a routine visit granted by Justice Binta Nyako of a Federal High Court in Abuja was led by Chief Mike Ozekhome (SAN) and another lawyer, Ifeanyi Ejiofor, accompanied by some of the IPOB leader’s family members.

The aim of the visit was to give the detained Biafra nation agitator feedback on the Court of Appeal’s proceedings of September 13 where the legal team prayed the appellate court to dismiss the remaining seven charges of terrorism and treasonable felony brought against him by the Federal Government.

Ejiofor, in a statement issued on Friday after the visit, said Kanu was in high spirit and confident that the Court of Appeal in Abuja would discharge and acquit him from the terrorism charges.

According to him, Kanu used the visit to send words of appeal to his followers, especially the Umuchineke, to remain consistent, resolute, unshaken, focused and prayerful with the hope that there must be light at the end of the tunnel.

The Court of Appeal sitting in Abuja, the Federal Capital Territory on Tuesday, has reserved judgment on the case against the detained leader of the proscribed Indigenous People of Biafra, Nnamdi Kanu.

Human rights Lawyer, Mike Ozekhome (SAN), who led the delegation of legal practitioners representing the IPOB leader, urged the court to strike out the remaining charges citing a lack of credibility.

Ozekhome specifically prayed the appellate court to review the April 8 ruling of the trial court which struck out only eight out of the 15 charges.

He also insisted that the charge FG entered against him had no basis in law. Kanu, in his appeal dated April 29 and marked CA/ABJ/CR/625/2022, applied to be discharged and acquitted.

However, following an application the embattled IPOB leader filed for abridgement of time, the appellate court brought the matter forward for hearing as against the initial October 11 fixed for the hearing.

When the matter was called up today, a three-man panel led by Justice Jummai Hanatu, said it had no need to delve into the issue of bail since the substantive appeal was ripe for hearing.

Arguing the appeal claim, Ozekhome alleged that his client was forcefully abducted from Kenya and illegally renditioned back to the country.

“My lords, he was enjoying this bail without breaching the terms. However, he was in his ancestral home when agents of the respondent invaded his home in September 2017.

“When the Appellant travelled from London to Kenya, agents of the respondents, on June 27, 2021, forcefully abducted the appellant, tortured and renditioned him back to the country without following any extradition process,” Ozekhome added.

The Indigenous People of Biafra (IPOB) congratulated the Catalans for their annual Independence celebration on September 11, 2022.

The group also commended them for successful and peaceful celebrations of their freedom.

In a statement by its Media and Publicity Secretary Emma Powerful IPOB said the Catalans displayed readiness to be on the side of Biafrans to achieve a Sovereign Independence State of Biafra.

The separatist group expressed hope of matching into its own freedom in no distant time, insisting that Biafra’s freedom is no longer in doubt.

The statement reads: “We wish to congratulate the Catalans for their Annual Independence celebration of Catalonian Nation held on 11th September 2022. We commend Catalans for the successful and peaceful celebrations of their freedom.

“Catalans have suffered for almost a decade in the fight for their liberation but this time God Almighty has given them freedom from the people of Spain.

“IPOB and Biafrans pray for wisdom, knowledge and courage to sustain their New Nation.

“Biafrans are celebrating with you as we hope to match into our own freedom in no distant time. The Catalans have displayed their readiness to be on the side of Biafrans to achieve Sovereign Independence State of Biafra.

“Biafra freedom is no longer in doubt. It is a matter of little time. Biafra will get their freedom with the help of numerous friends and Allies across the world.

“Dear Catalans, we celebrate your doggedness and resoluteness which has paid off. Once again congratulations on the Annual Independence Celebration.”

Kanu is expected today at the appellate court against the federal government in Abuja.

Kanu’s lawyers are expected to be spearheaded by Mike Ozekhome, SAN, according to a statement by Ejiofor on Monday.

Ejiofor made the statement after their routine visit to Kanu at the headquarters of the Department of State Services (DSS).

The statement partly read, “Today’s (Monday) visit was eminently led by the legal Iroko of our time, the indefatigable Lead Counsel to Onyendu-Chief Mike Ozekhome, SAN.

“It was a reassuring visit where details of tomorrow’s (Tuesday) strategic legal fireworks was distilled by the erudite Silk.

“The legal team, ably led by Chief Ozekhome, SAN, is ready and well prepared for tomorrow’s (Tuesday) outing as no stone will be left unturned.

“Kanu specially requests you all to intensify your prayers and supplications and also extended his profound love and deep sense of regards to you all.”

The pro-Biafra, group said the sit-at-home has become necessary following the appearance of it’s leader in Court in continuation of his on going case with the Federal government of Nigeria.

A statement by IPoB’s Media and Publicity Secretary, Emma Powerful, entitled, “IPoB declares Tuesday 13th September 2022 sit-at-home”said that all parts of Biafraland will completely be locked down on that day.

IPoB’s statement read “The global family and movement of the Indigenous People of Biafra IPoB, under the command and leadership of our indefatigable liberator Mazi Nnamdi Okwuchukwu Kanu, wish to announce to the general public especially Biafrans that Tuesday 13th of September has been declared a day of civil action in the form of sit-at-home in Biafra Land.”